From Michael Beschloss, the presidential historian, quoted in The Atlantic yesterday:

“This is the only president in American history who incited an insurrection against Congress that could have resulted in assassinations and hostage-taking and, conceivably, the cancellation of a free presidential election and the fracturing of a democracy. That’s a fact, and it won’t change in 50 years. It’s very hard to think of a scenario under which someone might imagine some wonderful thing that Donald Trump did that will outshine that. He did, literally, the worst thing that an American president could ever do.”

The same article also ran this photo of Trump and his wife as they were leaving the White House. I've never seen him like that -- he looks utterly defeated. 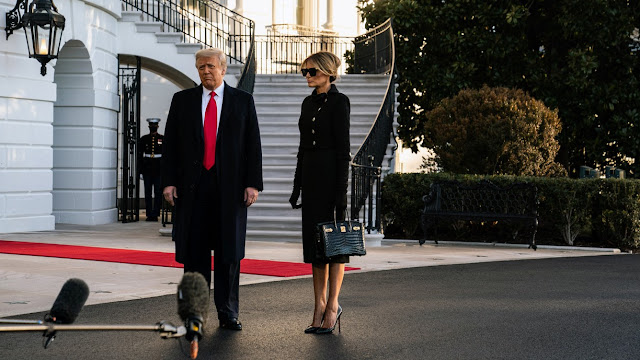 He's not the only one.

EM, thanks for that article. I've been meaning to write something about Qanon after reading something that made a lot of sense to me in terms of explaining them. I'll try to get to it soon.