Yesterday Gallup released their final poll regarding Trump and his presidency. They wrote:

As President Donald Trump prepares to leave the White House, 34% of Americans approve of the job he is doing as president, the worst evaluation of his presidency. His 41% average approval rating throughout his presidency is four points lower than for any of his predecessors in Gallup's polling era. Trump's ratings showed a record 81-percentage-point average gap between Republicans and Democrats -- 11 points wider than the prior record. 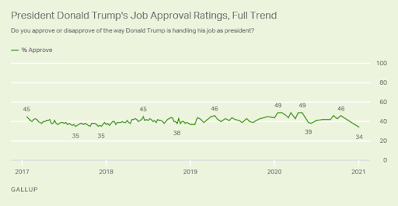 From the same page, this shows how poorly Trump ranks historically -- dead last since Truman: 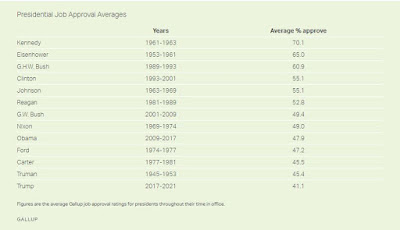 However, in a poll taken after the January 6th insurrection, 90% of Republicans polled approve of Trump's job performance(!):

Nearly nine in 10 Republicans approve of Trump’s job performance, according to the survey, a figure virtually unchanged from just ahead of the November contest. Eighty-nine percent of Republicans said they approved of Trump before the election, compared to 87% in the most recent poll.

Incredible. Even after Trump spent his entire term lying to the American people, even after he outrageously lied about the election results for two months, even after he incited an insurrection -- domestic terrorism -- and an attempted coup, almost all Republicans still support him.

This country has a serious problem, and it's called the Republican party. This is probably only the beginning of our problems. As Bret Stephens wrote in today's NY Times, in a column titled "Lincoln Knew in 1838 What 2021 Would Bring -- Before Jefferson Davis there was John C. Calhoun. What rougher beasts do Trump, Hawley and Cruz prefigure?"

Donald Trump is not a man of “the loftiest genius.” He is, as I’ve written before, a political arsonist who managed, in his inveterately asinine way, to burn down his own presidency while attempting to torch everyone and everything else. Neither is Josh Hawley nor Ted Cruz a lofty genius. They are credential-holding ideological grifters who lack the wit to see how easily they are seen through.

But the three are at least a hazy approximation of what the younger Lincoln most fears — men in the mold of Caesar or Napoleon who would sooner tear down than defend republican institutions in order to slake a thirst for glory. Before Jefferson Davis tore the federal government asunder, John C. Calhoun tried to nullify its power. What rougher beasts do Trump, Cruz and Hawley prefigure? For that matter, for what kind of Reichstag fire was the Capitol Hill insurrection merely a test run?