Methane Levels May Be Increasing Again 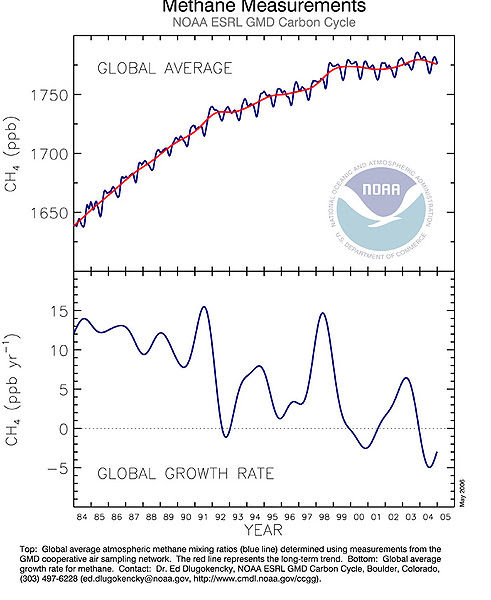 Atmospheric methane levels have been mostly flat since the late-1990s, but they may be on the increase again. A discussion paper in Atmospheric Chemistry and Physics finds that, for two sites in Germany, methane levels are increasing at a persistent rate of about 5 parts per billion (ppb) per year since 2006.


"This is either the longest and largest positive trend anomaly since >25 yr when systematic observations began or the onset of a new period of strongly increasing CH4 levels in the atmosphere."

The cause isn't clear, but there are some indications it may be due to natural wetland emissions, perhaps due to precipitation from recent La Ninas.

A renewed increase would not be good news for the climate, since since methane is a strong greenhouse gas (23 times stronger than carbon dioxide, though it resides in the atmosphere for a much shorter time). Some scientists are worried that the warmer temperatures in the northern latitudes may lead to higher methane emissions from melting permafrost and marine hydrates, an example of the kind of positive feedback that amplifies anthropogenic CO2 warming.

It is not actually new finding that methane levels are increasing again. Here are some papers dealing with that (among other things):

New thing in this paper seems to be that they suggest that the increase started already in 2006 (earlier papers have said it started in 2007) and has lasted to 2011. However, as this is a local study and some of the previous studies have been global, I wouldn't draw too far-reaching conclusions from this one. Also, as the linked paper is a discussion paper, this paper is still under peer-review, which means that some of the conclusions of the paper might change (or even the whole paper might be rejected).

One should use Barrow Alaska's measurements since it is the trend-leader for the rest of the world.

Methane levels seem to have slowed down again here and there may be an early seasonal peak this year which points to a decline again.