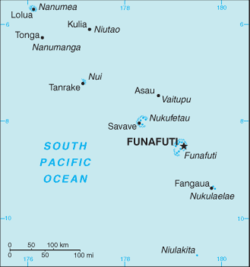 By the way, that Harper's article on Tuvalu doesn't come to any firm conclusion--and certainly not the conclusion that Tuvalu is necessarily doomed. Actually the author seems to suspect Tuvalu might be playing the issue for all the foreign aid they can get, even as they might be going under. Or maybe not going under.

Reading it online requires a subscription (there's always the newsstand), but here are a few more excerpts:


The basic facts are these: Tuvalu’s average elevation is about three feet above sea level, and water expands as it gets warmer. If current global-warming trends continue, the National Research Council predicts, the sea will rise by at least two feet in the next ninety years. Even if industrialized countries drastically reduce carbon emissions in the near future—and there is little reason to think they will—Tuvalu is in serious trouble.

This is the story Tuvaluan officials like to tell. But as with any scientific story, even where there is broad consensus, the details are debatable. Global sea levels are rising, but not homogeneously. The fluid dynamics are too complex to model, but it’s theoretically possible that, as in a sloshing bathtub, some parts of the Pacific will rise sharply while others will fall. And even where waters do rise, some scientists think islands will adapt and accrete. In fact, the only study to measure Funafuti’s shoreline over time, published in June 2010, found that the atoll’s area has grown, not shrunk, over the past twenty years. Even the environmentalists who sounded the alarm—-Tuvalu will sink in fifty years!—-admit that fifty is, at best, a guess.

The author meets some foreign administrators of the Tuvalu Trust Fund, having dinner while on the island:


I asked them whether they thought global warming posed an imminent threat, and Abbott made a sour face. “Don’t ask me that,” he said. “I’m not going to give you the answer you’re looking for.”

“He’s a skeptic about that stuff,” Wrighton explained. “Me, I think global warming is real, but I do believe you can find science to support either side. And if you're one of these tiny countries, and this is the one issue that can get you traction internationally—‘We’re vulnerable, we’re sinking’—wouldn’t you use that to your advantage?”

“I agree with that,” Abbott said, “in the sense that it’s in the self-interest of Tuvalu to seem as pathetic as possible.”

“But isn’t there a contradiction?” I asked. “If you’re asking for money to build a new school, yet the claim is that your land will be submerged in fifty years—”

"You can't have it both ways," the American consultant agreed.


Most development consultants I spoke to sounded comparably cynical. Why shouldn’t the Tuvaluan government be complacent? Donors rewarded them for drawing attention to problems, not for finding solutions. Never mind that Tuvalu was staking its economic future on the claim that it had no future, or that Tuvaluans themselves did not seem truly convinced they were sinking. International aid was a marketing competition, and with sea-level rise, Tuvalu had found its niche."

pertinent link about tuvalu. NOT SPAM, y'all. wrote this some months back