PIOMAS's Arctic sea ice volume for August is 8,150 km3. That's a lot of ice no matter how you chip it. It's the highest August volume since 2009, which was way back in the very first decade of this century, and the lowest anomaly since April 2010, which is just as ancient. Back then Obama was still new to his office, and hadn't yet sent the entire country into unfettered freefall. It was before the death of the great actor Dennis Hopper, and he was born in 1936. So in a way you can sort of say Arctic sea ice is at its highest since a dying man who had grew up in the midst of the Great Depression.

A quadratic (2nd-order) fit to the data is still much better than a linear fit, which just goes to show you can prove anything with statistics. But in the last five years an exponentially rising fit probably beats all in the sense that a warmist would never mean it. (I'm afraid to actually calculate it, though.)

All of the six lowest August SIE volumes have happened since 2007, a time when Dennis Hopper was still widely considered to be the edgiest actor in the world, if not the greatest. (Did you know he as in Cool Hand Luke?) And there must have been a gazillion puppies born since then, and who really knows how many generations of dogs that entails? And that's certainly not going to stop now. 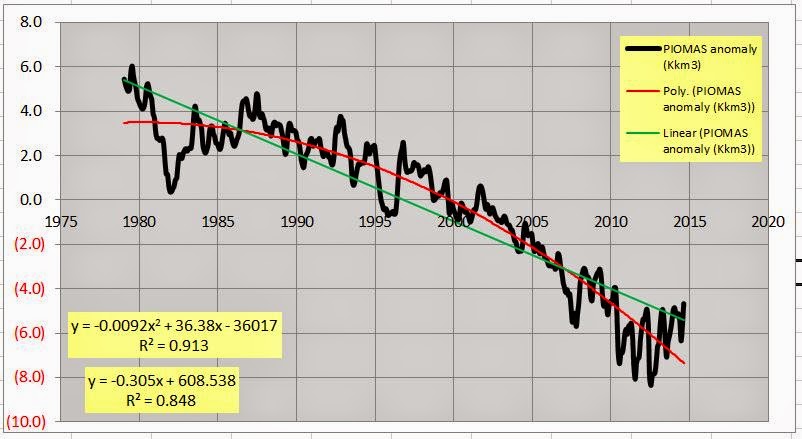 From the chart, it looks like the latest volume figure is the highest since just after 2010, the point at which Obama had proven that pathological bipartisanship is not a viable strategy against resurgent domestic fascism.