Anthony Watts wrote such as shockingly rude email to a scientist that I'm reproducting it from Sou's site, if only to slightly increase the chances this information will make it into the distant future, when people who never heard of blogs or HTML are looking back into history to understand who exactly it was misleading the world so badly, and how.

This is from Anthony Watts to Tom Peterson at NOAA, a co-author on this week's Karl et al Science paper on the claimed hiatus: 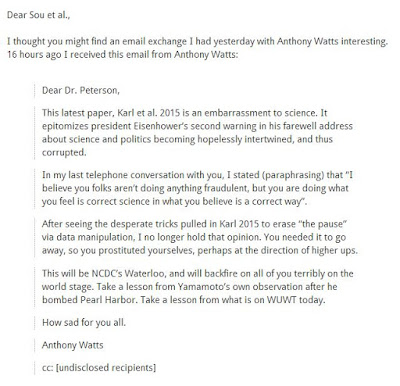 You can go to Sou's site to read Peterson's reply, which was far better than anything Watts deserved. And whose questions, of course, Watts will never try to answer.

This generates lots of thoughts, but maybe the best reply is a comment I read on Paul Krugman's blog today. His post was about why he is a Keynsian, but this particular comment is larger than that: 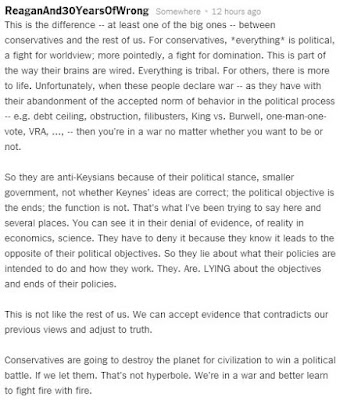 Watts and his blog are obviously not about countering the science with better science -- and, like any scientific ideas, the only thing that could ever replace the science of AGW is better science, unless we enter another Dark Age -- data and evidence and superior ideas -- but about a sinister denial that seeks to win the debate by other methods. Because they  haven't been able to defeat the science, or even come close. I see a lot of this lately, like this and this.

Emails like that above show how they will stop at nothing -- because they aren't about science, they are about war. And in war you try to win by any means necessary.

Ever since I started studying science as a teenager, its most attractive aspect to me was its intellectual honesty. There have been and are now rousing debates in science -- I've been in seminars where you could cut the heated arguments with a knife. But the differences are, with almost no exceptions, honest ones based on honestly held opinions based on evidence and science.

So to me -- and, I suspect, Thomas Peterson, and to (100-epsilon)% of scientists and to the people who read this blog -- choosing some other value, some other strategy, is almost incomprehensible. So it's too easy to dismiss.

I think it's clear Watts et al are losing in the long-run (just one small piece of evidence to the right), but there's no question valuable time has been lost and is being lost -- at a rate of about 0.015 C of warming per year -- time the future will someday be wondering about. I expect they will be angry.
Posted by David Appell at 6/06/2015 06:47:00 PM

While this isn't the main point of your article, I am very wary of any claim by Krugman (and by extension, the commenter you cite) on reconciling his world view with data in the absence of ideology. When fellow Keynesians have issues with him (Jeremy Sachs, Lars Syll , or Rogoff and Reinhart), that is more of a “red flag” than his usual detractors criticizing his unwillingness to change views based upon data (Robert Murphy, Austrian or Scott Sumner, Monetarist). The phrase “to win the debate by other methods” is one that I personally believe true about Krugman (defended by Noah Smith, attacked by rival Niall Ferguson).

As Russ Roberts is saying on Twitter in response to reaction on Krugman’s article: "You can't ignore all empirics -- facts do matter -- but very difficult to tease out causality in a complex world". As a person who is a casual observer in the climate science debate – looking from the outside in trying to make sense of it all – I see the same thing. I can go to Roy Spencer or over to Climate Etc, and then drop over at Real Climate or Skeptical Climate, and conclude – as an outsider – that experts are having a difficult time of teasing out casualty in a complex world.

To address the point of your article, Watts is largely irrelevant to me because of the arrogance reflected his letter that you cite. That is why I don’t go to his website much anymore. Your statement that “Watts et al are losing in the long-run” is true, but Watts isn’t who I rely upon for the opposing viewpoint - I simply don’t give a commentator like him the same credence.

That's 2 to 40, or 95% of your sample support the general consensus of climate scientists.

Spencer is a member of a group known as the Cornwall Alliance who believe that the world was given by God to plunder as man sees fit, and who view contemporary climate science as a threat to their world view.

If you rely on Spencer for unbiased commentary on contemporary climate science, then you are sadly misled. Dr Curry makes a business out of the using the same models she decries in her blog - in fact she has committed very few of her doubts to paper or submitted them to peer-review.

Yes, I am fully aware of the staffing of both websites. If your point in bringing up percentages was anything than argumentum ad populum for climatologists, then please explain. (If it was, there is no need to.) As an outsider viewing those specific sites, I see a minority opinion from climatologists that should be considered and rebutted.

David, you may be interested in Sou's latest updates, in which Watts claims he is being slimed. Yes, seriously. He accuses Tom Peterson (as co-author on Karl et al) of fraud, and then complains he is being slimed in a reply that is far, far, far more polite than Watts deserves.

The man (Watts, of course, lest anyone wonders) is despiccable.