The Geniuses Advising the Pope on Science

The Heartland conference deniers seem worried about the forthcoming Papal Encyclical on Climate Change. The last thing they want is for the argument to move from environmental grounds, where they can make fun of greens and offer up claims about costs and benefits, to a moral plane, which is (to say the absolute least) hardly their strong suit. It's not so easy to dismiss the Pope with some -ist or -ism label.

So who's advising the Pope? Some of the best scientists on the planet, including Edward Witten, Stephen Hawking, Francis Collins, Mario Molina, Maxine Singer, and many more:

Who's advised Popes in the past? Many of the best scientists humanity has ever produced, including 44 Nobel Laureates, such as Rutherford, Planck, Bohr, Dirac, Schrodinger, both Yang and Lee, Salam, and many more: 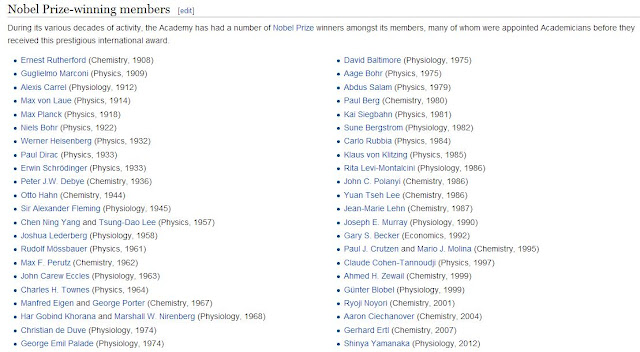 Inhofe's saying “The pope ought to stay with his job, and let us stay with ours," displays a stunning lack of awareness of what religion is truly about. Inhofe might want to carry something besides the weekly Bulletin out of his pew this Sunday.
Posted by David Appell at 6/14/2015 10:06:00 AM

I don't recognise many of the names on either list, though I have heard that Stephen Hawking has proclaimed himself to be an atheist. How many of those are climatologists ? It's a shame that so many sceptics are now called deniers. This presumably includes the authors of the papers listed at
http://www.populartechnology.net/2009/10/peer-reviewed-papers-supporting.html and at http://www.co2science.org/ and elsewhere, and certainly makes it difficult to have a meaningful discussion.

The Pope, if he is going to make an 'infallible' proclamation about climate change (when the climate has always changed, and will always change) will need to choose his words very carefully, especially as the solar and oceanic cycles are near or just past their maximum values. If the global temperatures pause or decline over the next few decades, this could have serious repercussions for the Catholic Church, if the Pope decides to endorse the CAGW theory.

Why don't you just list out your climate change denier talking points in point form, it would be quicker and more honest.

The massive increase in adult huggies consumption, itself, is going to contribute an additional 0.2-0.4 ℃ temperature increase!

Richard wrote:
"The Pope, if he is going to make an 'infallible' proclamation about climate change (when the climate has always changed, and will always change"

1) The climate doesn't always change. The Holocene has been remarkable for its climate stability, with a global temperature change of about 0.5 C in 10,000 years. It's a big part of what's allowed civilization to flourish.

2) One of the big reasons why climate changes is changes in atmospheric CO2 -- just what we're doing now.

One has got to love Mallett's reference to that "1350+ papers!" list. Filled with old papers from sometimes more than 30 years ago, papers in E&E (a "social science" journal), lots of the usual suspects, and several opinion papers that are at best "editor-checked" rather than reviewed. I noticed it even used a paper that pointed to active volcanoes under antarctica as a suitable paper to support skepticism about AGW/CAGW...

Marco needs to read the "Rebuttals to Criticism" section of the list,

Rebuttal: The age of any scientific paper is irrelevant. Using this argument would mean dismissing Svante Arrhenius's 1896 paper "On the influence of carbonic acid in the air upon the temperature of the ground" and the basis for greenhouse theory. Regardless, there are over 1000 papers published since 2000 and over 1250 papers published since 1990 on the list.

Criticism: Papers on the list are not physical science papers.

Rebuttal: Every counted paper on the list is checked that it is published in a peer-reviewed journal and (if possible) that the specific document type is peer-reviewed. Critics have always been asked to provide evidence to support their allegations, yet repeatedly fail to do so. If a paper is shown to be listed in error it will be removed. The list also includes supplemental papers, which are not counted but listed as references in defense of various papers. These are proceeded by an asterisk and italicized so they should not be confused with the counted papers. There is no requirement for supplemental papers to be peer-reviewed as they have no affect on the list count.

Criticism: Papers on the list do not argue against AGW.

Rebuttal: This is a strawman argument as the list not only includes papers that support skeptic arguments against ACC/AGW but also Alarmism. Thus, a paper does not have to argue against AGW to still support skeptic arguments against alarmist conclusions (e.g. Hurricanes are getting worse due to global warming). Valid skeptic arguments include that AGW is exaggerated or inconsequential, such as those made by Richard S. Lindzen Ph.D. Professor Emeritus of Atmospheric Science at MIT and John R. Christy Ph.D. Professor of Atmospheric Science at UHA.

Sorry but there is no consensus...

Andrew: I don't put much stock (if any) in your links -- they are to blog posts and biased sources, not to the scientific literature. Try harder.