William Briggs is a statistician who was a co-author on that trashy Monckton et al paper published in a Chinese journal -- here's a thorough dissection of it, and this paper by Richardson et al strongly rebuts the whole miserable thing.

He wrote an article for something called The Stream complaining that Hans Schellnhuber -- you remember the death threat he received, captured on video -- is a "self-professed atheist and scientific advisor to the Vatican," and that in 1999 he wrote an essay for Nature

And because the Pope told the religious to start acting like they're religious instead of mouthing the words, and because Schellnhuber advised the Pope, Schellnhuber must also be destroyed. Briggs tries to hang him on (1) being a lousy smelly hippy atheist, together with (2) Schellnhuber's mentioning of the Gaia hypothesis.

In his essay, Schellnhuber made some fanciful comparisions and speculations about the Gaia concept -- along with the "forces" Shiva and Prometheus. As far as I can tell, that's about all the Gaia hypothesis is -- fanciful speculation, a very loose analogy to how the Earth works. Schellnhuber even expressed this, writing


"But is it really Gaia who commands the engine room of the Earth system? Palaeorecords do not provide a clear answer to this question. What we do know is that rather small and regular external perturbations, like faltering insolation, repeatedly provoked the ecosphere into alternative modes of operation; glaciations in the 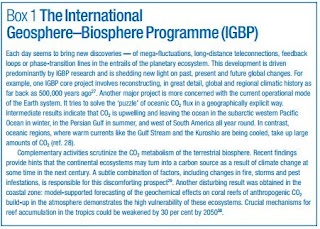 Quaternary period seem to be a conspicuous example of such a self-amplifying response, although the precise mechanisms at work are not yet fully understood."

Remember, this is an essay, not a scientific paper. It's trying to explore different analogies to shed a little light on the "Earth system" in the Anthropocene. It does have plenty of scientific thought, like the Box to the right, but Briggs can't deal with that, let alone hang Schellnhuber on it.

So he takes a shot at Schellnhuber and, not knowing the science, completely misses. Mentioning a 2009 article Schellnhuber co-authored in PNAS about tipping points, Briggs wrote:


Tipping points are supposed moments when some doom which might have been avoided if some action had been taken, is no longer possible to avoid and will arrive no matter what. Tipping points have come and gone in climate forecasts for decades now. The promised dooms never arrive but the false prophets never quit.  Their intent is less to forecast than to induce something short of panic in order to plead for political intervention. When the old tipping point is past, theorists just change the date, issue new warnings and hope no one will notice.

One of the tipping points Schellnhuber asked about was the melting of the Greenland ice sheet, depending on what the temperature did. All of the selected experts (who answered the questions in 2004 and 2005) gave moderate (~15-25%) to quite high probabilities (50-80%) for this event to have occurred by 2015. The ice did not melt. 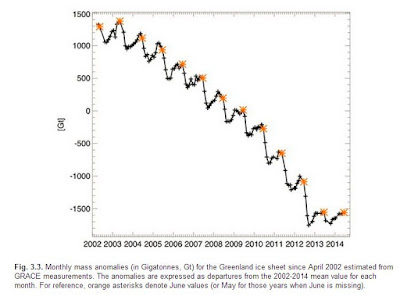 Of course, just 12 months ago scientists said the Amundsen sea sector in West Antarctica looks to have passed a tipping point -- it will inevitably slide into the sea, with a 3-foot rise in sea level. (This was predicted in 1978 by Ohio State University scientist J.H. Mercer.) So much for "supposed."

In fact, ice loss in Greenland is accelerating, at 27 gigatons/year2, according to Enderlin et al (2014). At its current melt rate -- assuming the acceleration itself doens't get any bigger -- the entire 2.85 Mkm3 of the Greenland ice sheet will be gone in just 420 years. 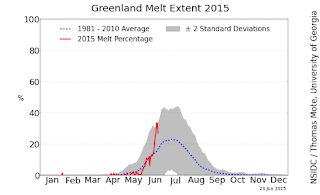 The only data Briggs linked to was for this year alone, and it (to the right) already shows strong melting in Greenland.

Schellnhuber was right. And Briggs completely mischaracterized his work and the situation in Greenland.

I'm getting tired of deniers lying about what scientists say, and then faulting them based on the lies they make up. It's dishonest, devious, and duplicitous. And it reeks of desperation, employed only because they've lost the science.
Posted by David Appell at 6/24/2015 11:50:00 PM

I really enjoy the subtext that an (apparent) religious believer can attack the pope for his asking Christians to behave as such but an atheist cannot confer amiably and productively with same pope. Presumably the pope is being attacked also for associating with someone outside his tribe.

Any agreement/proof that Mr Schellnhuber actually IS a “self-professed atheist,” not that it matters?

Briggs' trashy zealot reading list includes Breitbart, The Daily Mail, Drudge, and some of the most unobjective, nonrigorous Catholic apologists out there (too bad they never apologize for the right things!), but he pretends to cogitate empirically about climate. He and UKIP's Mr. Monckton deserve each other.

Tamino has enjoyed him in the past.
https://tamino.wordpress.com/2012/02/01/william-m-briggs-numerologist-to-the-stars/

What do you expect from a rightwing bigot.