... And Fake Concern about Bird Hazards

Here's another of the kind of faked impressions Pierre Gosselin presents for his readers: about birdlife:

Are wind turbines a hazard to birdlife? Undoubtably. But fossil fuels, buildings and cars are all much worse, so those opposed to renewable energy taking the place of fossil fuels don't get to suddenly become bird lovers when it's convenient.

From "Pecking Order: Energy's Toll on Birds," by US News, August 22, 2014, here are the numbers of bird deaths in the U.S. for different types of energy generation: 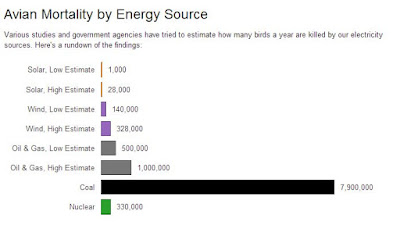 I doubt it's much different in Germany, except for the numbers being proportionally smaller and without the nuclear generation. Here are the numbers for buildings, cars, and other bird killers:

(An earlier version of this chart gave the year 2002 for these numbers, but it seems stripped off the current one.)

The fact is, if you like birds and want them to thrive, you'll advocate for renewable energies.

Although I'm not aware of any comparable statistics for other forms of power generation, and of course this white-nose business seems to make the whole debate academic.

1. The figures for bird mortality have large error margins.
2. Wind power requires another form of electricity generations as backup for when the wind doesn't blow (or blows too hard) as it can not be stored economically, or transmitted from elsewhere economically.
3. The air brushed photos accurately show what those places look like without wind turbines.

http://mothersagainstwindturbines.com/2015/06/06/tales-of-wind-turbine-torture-not-a-bedtime-story/ has a good account of the effect on humans living near to wind turbines, such as those depicted in the photos.

Richard, as noted earlier, the photos were taken from a distance, using a long focal length lens, to make the turbines appear closer to the buildings than they actually are.

Now, how about providing before/after pictures of a coal mine? Or a village destroyed by a dam? Or a uranium mine? Or an oil field?

Nobody is advocating building wind turbines as useless decorations. The point is that they reduce the need for power from other sources. If you're goi to argue that wind turbines are bad, you have to answer the question "compared to what?"