COVID-19 Cases on the Rise Again

After two months of a decline in COVID-19 cases -- thought never getting back to the level of the first peak -- it looks like cases are increasing again. Who to blame? One obvious group are the idiots who won't wear masks, like the Idiot-in-Chief, the idiots who go to his rallies and cram in together without wearing masks, the Target store idiots (fined), North Dakota maskless idiots, and the entire crowd of ignorant Americans who are ruining this country and bringing about its downfall. From the NY Times: 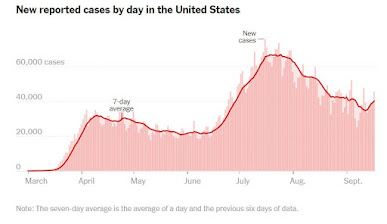 When is it time to get out?

Also the BLM and ANTIFA demonstrators and the college students.

There are no "Antifa" protestors as Antifa isn't a group, it's an ideology.

Yes, the college students -- I should have included them. Thanks.

Well, Antifa is a very nebulous, secretive, kind-of group, not at all what people imagine. Read:

The author is "a historian of human rights, terrorism and political radicalism in modern Europe at Rutgers University. He is the author of "Antifa: The Anti-Fascist Handbook.""

Myth No. 1
Antifa is a single organization.

Myth No. 3
Antifa is affiliated with the Democratic Party.

Myth No. 4
Antifa is funded by liberal financiers like George Soros.

Myth No. 5
Antifascists are the 'real fascists.'

D.A.:
Also FBI director Christopher Wray testified to congress under oath on Thursday confirming what that WP article says. He also said that White supremacists were the main terrorist threat in the USA although some criminal activity and violence during demonstrations was perpetrated by those who self identify as Antifa. Strange isn't it that Barr and Trump are obsessed with Antifa whilst giving right wing extremists an almost free pass or even encouraging them.

Regardless of who funds ANTIFA and regardless of their exact structure, people dressed in ANTIFA black clothing, often with their faces concealed, have been committing terrorist acts for years. They come armed with weapons and incendiary devices.

Why don't Democrats loudly denounce ANTIFA? How difficult is it for a politician to denounce a group who attack policemen of all races? A group who burn down private businesses and government buildings?

Consider signing the statement by the Union of Concerned Scientists and.the Federation of American Scientists

DiC: Can you provide any evidence from reliable sources for your assertions please? I found this on Wikipedia.

Conspiracy theories about antifa which tend to inaccurately portray antifa as a single organization with leaders and secret sources of funding have been spread by right-wing activists, media organisations and politicians, including Trump administration officials[30] and the 2020 Trump campaign.[31][32][33][34][35] There have been multiple efforts to discredit antifa groups via hoaxes on social media, many of them false flag attacks originating from alt-right and 4chan users posing as antifa backers on Twitter.[36][37][38] Some hoaxes have been picked up and reported as fact by right-leaning media.[36][39][40]

During the George Floyd protests in May and June 2020, President Donald Trump and Attorney General William Barr blamed antifa for orchestrating the mass protests, but analysis of federal arrests did not find links to antifa.[41] There have been repeated calls from Trump, Barr and others to designate antifa as a terrorist organization which Barr has characterized as "highly organized".[42] However, academics, legal experts and scholars, among others, argue that antifa cannot be designated as it would be a violation of the First Amendment to the United States Constitution and there is no legal authority to designate a wholly domestic organization.[43][44][45] A June 2020 study[46] of 893 terrorism incidents in the United States since 1994 found zero murders that were specifically attributed to anti-fascists or antifa while 329 deaths were attributed to right-wing perpetrators.[29] Several analyses, reports and studies concluded that antifa is not a domestic or major terrorism risk and ranked far-right extremism and white supremacy as the top risk.

Strange then that Barr and Trump never stop talking about Antifa but never mention the Boogaloo bois or proud boys. Maybe you could find some evidence for Trump's claim that a passenger on a plane found himself surrounded by thugs in black on their way to disrupt the Republican convention.

And why don’t Republicans and Trump denounce all the right-wing yahoos, gun nuts and extremists?

Joe, thanks for that petition link. I don't sign petitions because I still do some writing and journalism, and though I'm hardly any big deal, I worry about the ethics. Though I know a lot of writers do sign them.

But I encourage others to sign the petition if they support the cause, which is a good one.

Al Sharpton helped incite a mob to a pitch of antisemitism so that they lynched an innocent student, Yankel Rosenbaum, simply because he was a Jew. The mob lynched another person, believing he was a Jew. They also destroyed Jewish-owned properties. On the third day of the disturbances, Al Sharpton and Sonny Carson led a march.[27] The marchers proceeded through Crown Heights carrying antisemitic signs and burning an Israeli flag.

Yet, Sharpton is highly respected by Democrats.

THese far right groups say they feel EMBOLDENED by Trump. Wonder why? Trump invited far right media figures to the White House, including an anti-semite:

The other day Trump retweeted a #PedoBiden tweet. This man supports thugs and murderers and is himself a POS. #PedoBiden. There is no bottom to his sense of morality. He is a sociopath.

Sharpton is highly respected by Democrats.

He is??? I never see him around anymore. I think he spoke at John Lewis's funeral, but that's because they were lifelong friends. Are any Democrats seeking out Al Sharpton's endorsement?

Al Sharpton helped incite a mob to a pitch of antisemitism so that they lynched an innocent student, Yankel Rosenbaum

Sharpton didn't speak the day until after Rosenbaum was stabbed. "Before being taken to the hospital, Rosenbaum identified 16-year-old Lemrick Nelson Jr. as his assailant in a line-up shown to him by the police." Nelson Jr was an African-American.

I see nothing saying Nelson Jr was Jewish:

Here's an NPR summary of that incident:

A car accident in which a Hasidic driver killed 7-year-old Gavin Cato, who was black, sparked outrage. Rioting erupted and lasted for three days, during which a rabbinical student, Yankel Rosenbaum, was fatally stabbed in an attack by a group of young black men. An estimated 43 civilians and 152 police officers were injured.

Against the objections of New York Mayor David Dinkins, who sought to calm tensions, Sharpton led a march of some 400 protesters through the neighborhood. He and his followers chanted "No justice, no peace." Some marchers were heard yelling anti-Semitic epithets. The march ended without incident.

A crowd of mourners gathers outside St. Anthony's Baptist Church in Brooklyn, N.Y., on Aug. 27, 1991 as the casket carrying the body of Gavin Cato passes by.
Joe Major/AP
In a eulogy at the boy's funeral, Sharpton criticized Jewish merchants in Crown Heights for selling diamonds from apartheid South Africa. He also said: "All we want to say is what Jesus said: If you offend one of these little ones, you got to pay for it. No compromise, no meetings, no coffee klatch, no skinnin' and grinnin'." Among the banners hanging to commemorate the boy, one read "Hitler did not do the job."

Many Jewish leaders and others say Sharpton incited the violence or at least perpetuated hostilities. They disapproved of his decision to hold the march on the Jewish Sabbath. Some already had criticized him days before the riots for remarks he delivered at an unrelated rally in Harlem: "If the Jews want to get it on, tell them to pin their yarmulkes back and come over to my house."

Sharpton rejects the blame. He says he was at his home in New Jersey — having been nearly fatally stabbed by a white man months earlier — when the violence started. He says he got involved on the second day of the riots and hadn't yet known about Rosenbaum's stabbing.

Last year, marking the 20th anniversary of the incident, Sharpton wrote an op-ed in the New York Daily News in which he admitted "our language and tone sometimes exacerbated tensions and played to the extremists." He said, "I have grown. I would still have stood up for Gavin Cato, but I would have also included in my utterances that there was no justification or excuse for violence or for the death of Yankel Rosenbaum."

Rosenbaum's brother, Norman, responded with his own op-ed in the Daily News rejecting Sharpton's recollection as "egregiously distorted and sanitized." He faulted Sharpton for failing to apologize for his "reprehensible" conduct: "Based on everything we have seen and read, Sharpton never called upon the rioters to stop their anti-Semitism-inspired violence. He never called on the rioters to go home. To the contrary, he stirred them up. And three days of anti-Semitic violence became the Crown Heights riots."

Finally, Rosenbaum wasn't "lynched," he was stabbed. Your language choice is a lie.

JoeT: on second thought, I’ll sign that petition. This blog makes my political preferences clear. Anyone who reads my magazine writing can see that clearly here. My earlier comment was silly.

Thanks for your notification of the petition.

As scientist or as journalists — or in your case, both — we don’t give up our right to express our opinions.

Now, more than ever, it’s important for scientists to stand up, not only for science, but for democracy itself.

Thanks Joe -- I signed the petition.

But I don't think of myself as a scientist anymore. Sure, I had a PhD. But I don't do research. I'm not employed to do science. Do you think I'm wrong about that?

I think the criteria is fairly loose, mostly that one has a PhD or working towards one. Clearly there are scientists, even Nobel prize winners, who signed and are no longer active. You were trained as a scientist and at one point you even engaged in research.The important thing is that you use that training in the field of journalism. That makes you a scientist.

Thanks for that, Joe.

Glad to know you're still reading the blog. I'll get back to more science after the election.

people dressed in ANTIFA black clothing, often with their faces concealed, have been committing terrorist acts for years.

Sounds like black bloc. It's been around a lot longer than Antifa.

How difficult is it for a politician to denounce a group who attack policemen of all races?

They do. Biden has spoken out against anyone committing violence at protests. I'll also go on the record as firmly against violence.

It would be a bit like if a political party denounced Christians every time one of their flock shot up a synagogue. Not every Christian is a psychopath.

I'm in no rush to get back to science. Other than the immediate health and welfare of friends and relatives during the pandemic, there is nothing more important than the upcoming election. The fate of our civilization is at stake.

Second, one of the reasons I've been reading your blog for quite some time now (although don't often comment) is that your training as a scientist comes through whether it's analyzing climate data or arguing politics. You DEMAND evidence and logic when confronted with an argument. I wish more journalists would be like that. Hell, I wish more people in Congress and in the WH were like that.