Weird Skies Here from Fires to the East

It looks very strange here this morning. What would ordinarily be a beautiful blue sky morning is instead a reddish-gray, almost like dusk. We had a big wind storm last evening and night, and it blew in a lot of smoke from fires in the Cascade Mountains east of here. We're also in a severe drought, so a lot of dust got blown up as well. People just 25 miles east of Salem have been ordered to evacuate, and those 16 miles east have been told to get ready in case they have to evacuate. It's stunning to think the fires could come this far west. 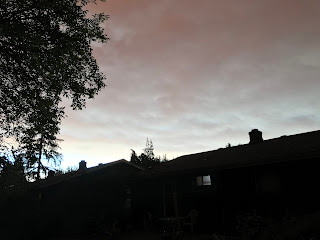 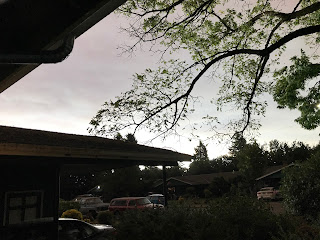 To the southeast, towards the sun, it looks a little better: 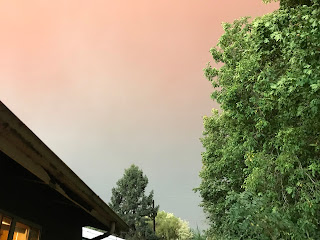 The situation doesn't look good here, or for much of the West:

Northwest Oregon is currently under an extremely critical fire weather warning. This is only the second time ever that the Storm Prediction Center has ever issued one for anywhere within the state Oregon. The other time was August 29, 2006. pic.twitter.com/DUJOacxCvc

I'm not going to look up the statistics right now, but, especially for California, which now seems to be getting serious fires yearly, this does not bode well.
8:30 am update - skies still look the same here; the sun isn't visible at all, and the street lights are still on.
Posted by David Appell at 9/08/2020 08:33:00 AM