Today was one of the strangest days I've ever experienced. I thought the sky was odd at 8 am, but by mid-afternoon, when I had an appointment across town, it was really strange, with a little ashe falling from the sky: 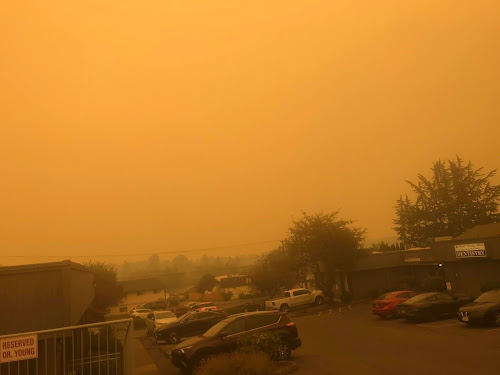 The governor has declared a state of emergency, and the highway through the mountains is closed just 12 miles east of Salem. I heard there was ashe falling from the sky further south in Eugene.

After my appointment I had to run an errand across the (Williamette) valley, and it wasn't until 4:30 pm that I came out of the building. The view was stunning; it looked like it was at 8 pm. My eyes stung, and the smell of smoke was noticeable in the air. Here's a picture from my iPhone, which like my pictures from this morning, came out much lighter than it appeared to my eyes. I'm not sure why. 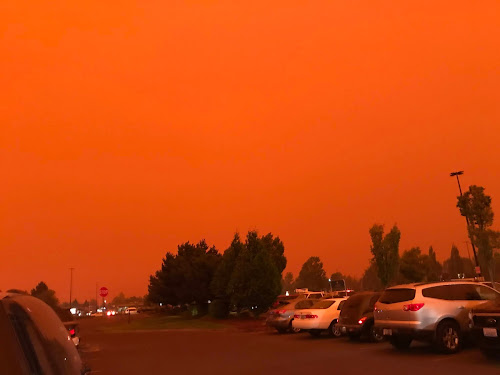 The sky looked much darker, almost like a heavy partial eclipse, maybe 60% (comparing it to 2017 total eclipse here). [Can't believe it's been 3 years already!]

When I turned on the [radio] news, the national media is putting all of their attention on the fires in California. OK. They've had a 10-year drought. Their fires seem to be getting worse every year. Whole towns have been burning down. Of course, Trump doesn't give a shit, or even notice -- he thinks people should just rake harder. Someday I hope trees get to vote.

They are saying this is a one in a generation event, so, please, complain to your heart's desire.

Yeah, you're right. I hadn't thought about that.

It's the same in the SF Bay Area