Update on the Situation in Oregon

It seems like there are fires everywhere now. Here is ashe on my car's roof, noticeable but not too bad: 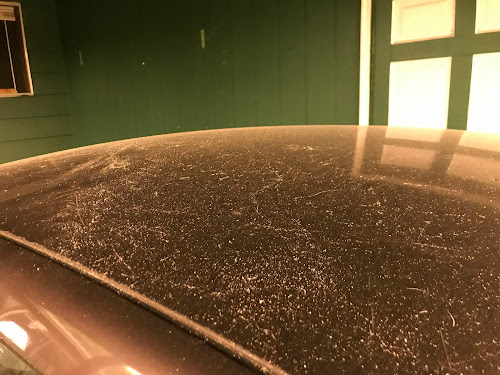 My sister said a couple of her colleagues in Oregon City have been told to evacuate. Oregon City is a suburb of Portland! It's really hard to imagine fires coming in that close.

Southern Oregon is getting it the worst. The town of Medford (pop 82k) is threatened and nearly everyone has been told to evacuate, and the small towns of Phoenix (pop 4,600) and Talent (pop 6,500) a few miles south are reported to be "pretty well devastated."

There are lots of personal videos on the Twitter hashtag #Oregonfires, if you're interested. The Washington Post just came out with another article, quoting the governor as saying the towns of Detroit, Blue River, Vida have also suffered significant damage. Blue River (pop 202) is in my county, but about 40 miles east where one enters the Cascade Mountains.


Gov. Brown said more than 300,000 acres are burning across Oregon, and that this could be the deadliest wildfire disaster in state history.


"The wildfires come after a record-shattering heat wave and amid human-caused climate change that is heightening fire risks, along with temperatures, in the West. These blazes are being driven by strong, dry, offshore winds that are causing extreme fire behavior, which can produce everything from mushroom cloud-like plumes of smoke that reach 40,000 feet in height, to vortexes that make it impossible for firefighters to contain an advancing fire."

But the governor is also saying these are "once in a generation events," so perhaps we should wait on attribution until scientists get to studying this in detail in the coming months. For example, also from WaPo:


“This event is unprecedented. I’ve talked to people who have been in fire for 20, 30, 40+ years and they’ve never seen anything like this before. Not this many large, rapidly spreading wildfires across such a broad region,” tweeted Nick Nausler, a fire weather specialist with the National Interagency Fire Center in Boise, Idaho.

You may be watching a transition.

Sometimes you see a forest suffering drought and fire, then what replaces it is a plant community adapted to a hotter drier climate.

This is happening along the US/Canada border as forest burns and regenerates as prairie.

Ent man: Is there a specific place along the US/Can border you have in mind?

I'm not sure if there are specific examples yet, but the possibility is being discussed in the literature.