From Jason Stanley's How Fascism Works, his chapter on "Law and Order," which I'm also finding insightful. This quote isn't ideally constructed, sorry -- I had to piece it together from Google Books, and still had to add some text at the end. 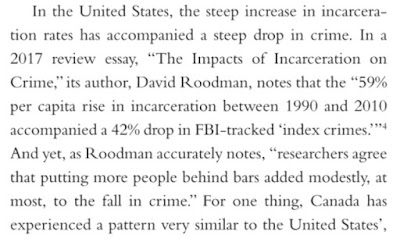 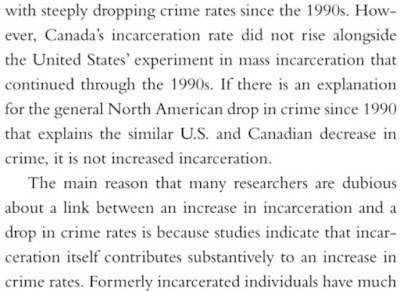 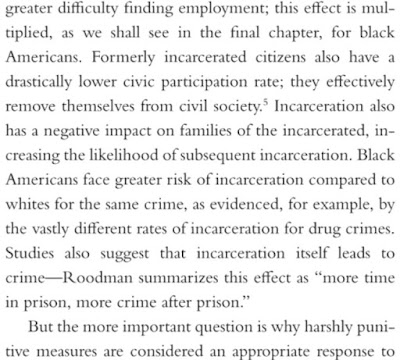 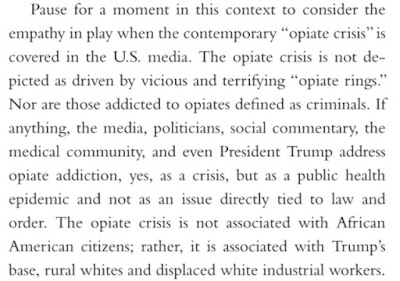 ...compassion, empathy, and the liberal values of
shared human dignity and equality."
Of course, Trump is all about "law and order," except when it comes to his friends, his children, and himself, all of whom get or will certainly get pardons, even preemptive pardons. They don't have to follow the law. Neither does Trump, calling for governors to call for special legislative sessions to vote for Trump electors to the Electoral College, regardless that Trump lost states by tens of thousands of votes. In Georgia, where Biden leads by 12,000 votes, the governor there doesn't have that legal option, so a special legislative session would be illegal. But a pack of Georgia Republican Senators don't care about that and have drafted a petition calling for one anyway, calling the situation an "emergency" when no evidence of fraud being presented after, I think, a recount and two signature audits. Trump doesn't care either, and repeatedly and obsessively now insists this must be done.
Sure, law and order. For us, not him. Another prime characteristic of fascists.
Posted by David Appell at 12/07/2020 01:15:00 PM

Stanley writes, "When a community has a particularly high crime rate, there is clearly a social problem, requiring empathy and understanding, and an urgent need to policies that access the underlying structural problems."

I agree with most of this. However, Stanley is wrong to simply assume without evidence that empathetic policies are the type of policies needed. He might be right, but for all I know some sort of harsh policy might be needed to deal with the underlying structural problems.

Lead in gas was a key driver of violent crime. Switching to unleaded may explain much of the drop.

If you're a conservative incarceration is a great idea. Lock them up and you can forget them.

No need to consider why they became criminals or do anything to help them move beyond crime.

Entropic, why forget about the prisoners? They are cheap labor.

Incarcerating criminals has worked in cultures all over the world for centuries. This method has two obvious virtues: criminals are taken off the streets, and crime is deterred. Maybe there's something better, but it can't be obvious. Otherwise someone would probably have found it already.

IMHO there is indeed a social or cultural problem within inner cities. However, methods to improve the culture are not obvious. A popular approach is based on the theory that poverty causes crime. So, give the people stuff: food stamps, welfare, rent supplements, negative income tax, etc. etc. This approach did not work. We've been using it for decades, but the problem remains. However, this approach does work for Democratic politicians. It gets inner city people to vote for them.

IMO one big reason of the crime is lack of alternatives. If a young person cannot get an honest job, what other choice does he have? Based on this theory, Trump's sensible efforts to create inner city jobs were also a way to reduce crime. E.g., cutting the corporate income tax rate, reducing illegal immigration, not setting the minimum wage too high, Enterprise Zones.

There may be subtler ways to encourage children to be raised to not be criminals, but I am unqualified to address them. Some people believe that having more two-parent families would help.

This method has two obvious virtues: criminals are taken off the streets, and crime is deterred.

Read the excerpt again -- the evidence does not support you.

David - you're a physicist and I'm an actuary. Neither of us has the background to properly evaluate Jason Stanley's comments. You find them "insightful". What does that mean? I think it means that he says things you would like to believe.

I looked up Jason Stanley in wikipedia. He's very impressive, but apparently has no background in penology. I imagine that there are others with actual penology experience who have with very different beliefs about how to deal with criminality. I see no reason to believe Stanley's POV over other POVs.

So, give the people stuff: food stamps, welfare, rent supplements, negative income tax, etc. etc. This approach did not work. We've been using it for decades, but the problem remains.

What's your basis for saying this?

And do you know that far more white people get social assistance than blacks? Did it work for whites? Again, how do you know?

Here's a blog post by a Harvard Law professor based on a 2015 paper:

It shows, country-by-country, homicide rates vs incarceration rates. It's a log-log graph. The US is clearly an outlier on incarceration. But it's also significantly above average on homicide rates, by, I'm estimating, half an order of magnitude.

It's impossible to draw a correlated straight line through the blob on this chart. That says there is no correlation, globally, between incarceration rates and homicide rates.

I'm interested in what you make of this. Thanks.

My basis for saying that our approach to inner city problems hasn't worked is that after many decades and the expenditure of literally billions of dollars, it hasn't worked. E.g., read Walter Williams's final column about Baltimore.
https://richmond.com/opinion/columnists/walter-e-williams-column-black-education-tragedy-is-new/article_64a2d96b-f32f-5d34-b317-0cf305e25ef4.html

However, as Stanley acknowledges, crime in the US went down when longer prison sentences were applied. I consider it a closed question that incarceration does work.

Frankly I'm more interested in Stanley's point that there is a social or cultural problem within inner cities. I think he's right. The question is what the government can do to help fix this problem.

P.S. Yes, there is a white underclass, too, as you say.

Los Angeles may provide a good experiment to judge whether or not incarceration works.
Los Angeles prosecutor plans to seek release of thousands of criminals
https://libertyunyielding.com/2020/12/08/los-angeles-prosecutor-plans-to-seek-release-of-thousands-of-criminals/

If all these criminals are released, we will see what happens to the crime rate.

I don't see why we have to wait for LA. Why can't we use the data above?

David - There are a great many differences between the US and other countries -- differences that affect the murder rate. It's probably the case that the US prison policy has a smaller impact than various other differences.

A more fundamental flaw in the linked study is that it compares the wrong thing. If two countries have identical sentencing, the one with more crime will have more people in prison. The author has the implication backwards. The right way to look at is is: "More crime leads to More imprisonment."

A better study would have compared murder rates against length of sentencing. However, such a study would still be of little value due to the problems mentioned in the prior comment.

“ My basis for saying that our approach to inner city problems hasn't worked is that after many decades and the expenditure of literally billions of dollars, it hasn't worked.”

David, thanks for the article by Walter E Williams.

There are, to be sure, educational problems in the inner cities. BTW the high school graduation rate for Oregon is only 80%, and that's an all time high.

If you lock up black men, of course their children are going to suffer in school, at home, and in life. That's the problem with incarceration, especially for nonviolent crimes -- it has wide consequences. It destroys families. It makes it very difficult for the incarcerated to get a job after they leave prison -- in his book Stanley quotes a study that shows it's much harder for a black man who was incarcerator than a white man who was incarcerated.

Blacks get heavier sentences than whites for the same crimes. Three strikes and you're out is ridiculous in certain cases.

David in Cal wrote:
The comparison of different countries is particularly uncertain, because the diffences are so great.
However, as Stanley acknowledges, crime in the US went down when longer prison sentences were applied. I consider it a closed question that incarceration does work.

You're ignoring Canada, which Stanley wrote about and I quoted in the post.

Something very similar happened in Scotland -- the crime rate went down sharply without incarceration. I'll try to write about it soon -- I'm a little busy lately and gotta make some money.

If you save money on schools to pay for more prisons, don't be surprised if you get more prisoners.

USA places over ten time larger fraction of their population in prison than Sweden. What kind of "cultural difference" can justify that difference?

Also, while those in prison are allowed to vote (except felons), naturally there are many barriers put in place by the system. Almost all are lower class and therefore likely to vote Democratic. Felons can't vote for the rest of their lives.