Statistical Buffoonery in the Texas Filing

This is from Texas's filing yesterday to the Supreme Court: 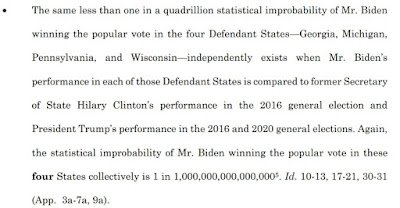 So Biden's chance of winning all four of those states, which he did, was 1 in 1075. What an incredibly lucky man! With those odds I hope he bet heavily on himself with his Wilmington bookie.
Apparently this Appendix hasn't been released yet. I'm sure they're polishing the fine details. Lawyer Eugene Volokoh calls it "flim-flammery of the highest order."
This gives a tad more insight, by a anchor on something called Peacock TV, a streaming service of NBCUniversal:

Do you know how big a quadrillion really is? Neither do I. But as Mehdi explains, “one in a quadrillion” is all the math you’re going to need to understand Trump’s chances of being president next term. pic.twitter.com/7Vodiimf4w

Yes, this is statistical garbage.

But as kayleigh Mcenany told us this is a signed declaration from a tenured professor. So it's just like all those signed affadavits Trump supporters keep telling us must be credible. I mean who cares if it's all bunk. It's only the future of democracy in America that's at stake.

J.D. - Fifty years ago, my friend JF, a statistics professor at Temple University used statistical trickery to promote desegregation. He would "prove" that some organization was discriminating against blacks, using some invalid assumptions. The result of his trickery was that more blacks got hired.

Frankly I don't this bogus calculation will work. I see no chance that the election will be overturned, whether or not it deserves to be overturned.

But as kayleigh Mcenany told us this is a signed declaration from a tenured professor.

I.e. she doesn't have a clue about the veracity of the analysis and isn't interested in getting other opinions.

The result of his trickery was that more blacks got hired.

You make it sound like that was a bad thing.

David in Cal wrote:
I think the election may indeed have been stolen

You are delusional, and this delusion is going to tear America into pieces.

David - I didn't say it was a bad thing that blacks got hired. My point was that a good thing resulted from a bad statistical analysis.

DiC, for your analogy to make sense you must think that it is a good thing if the election gets overtured, even if it is based on phony arguments. You dig yourself deeper and deeper into a swamp.

The discrepancy between mail in votes cast later in the day, and votes cast in person is too large to be simply chance. It seems obvious to me that all the votes prior to the mail in ballads must be fraudulent and should be discarded. Probably the in-person voting machines had been hacked, but no need to find the exact root cause. The statistics speak for themselves. /sarc

Layzej - the point isn't that Republican claims of fraud are necesarily correct. The point is, they should be fully investigated.

The point is, they should be fully investigated.

Why? They're getting laughed out of court. They have no credibility.

Just because someone claims something doesn't mean it should be investigated. There needs to be some *good* evidence behind it.

" The term prima facie is used in modern legal English (including both civil law and criminal law) to signify that upon initial examination, sufficient corroborating evidence appears to exist to support a case. "

In court after court the Trump legal team have failed to meet even this basic standard.

DiC at 1:56: “Yes, this is statistical garbage.“
Doc at 6:29: “ the point isn't that Republican claims of fraud are necesarily correct. The point is, they should be fully investigated.”

What is the value of the courts entertaining statistical garbage? Suppose they are stupid enough to fall for statistical garbage. Should they invalidate hundreds of thousands of votes? From which side? It would be just as valid to drop the votes prior to midnight as those after midnight.

In my opinion, nothing justifies filling people’s heads with garbage, even if there is a chance it could steal you the presidency.

David, how can the argument be both statistical garbage yet have a meaningful implication? It can't.