Real Scientists, and the Deniers Who Insult Them 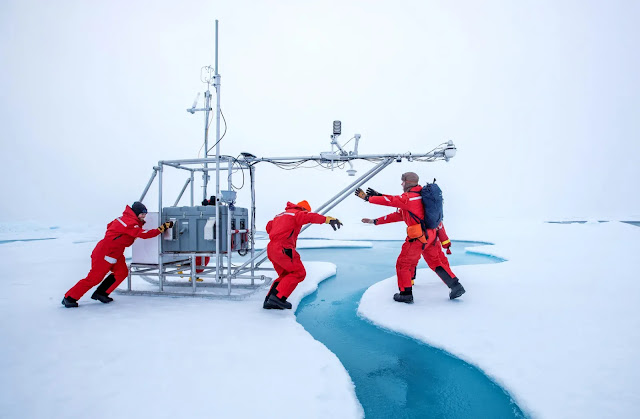 From Nature magazine's The best science images of 2020.

The great north. Scientists on the biggest research expedition ever to the Arctic take atmospheric measurements of temperature, humidity and water vapour. The MOSAiC mission has yielded unprecedented data on the north’s climate.

It's not easy to make science observations, whether it's of an electron scattering or a star's position during a solar eclipse or to get reliable temperatures in the Arctic. These are likely early career scientists busting their ass to get equipment to where it's needed to make the kind of measurements needed to make accurate, repeatable, valuable measurements in places where they're lacking and are needed to fill in gaps in our understanding. They're living in tents and eating oatmeal and granola bars for breakfast and shitting in windy nylon privies because they are devoted to science and doing their utmost to fulfill their piece of it to the best of their ability.

Rahmsdorf is complete and utter fraud.

it makes me wonder what Joel O'Bryan has ever done in his life.
I'm completely sure little Joel doesn't understand any of the science done by any of these scientists. I know it, you know it, and Joel knows it too.
BTW, I made a comment to Watts' site, and to Gosselin's site, about why their critique of Rahmstorf is mathematically illiterate, and of course neither has the courage to publish it. I'll blog it soon.
And by what right does the "skeptic" Anthony Watts -- proven wrong now over the dozen or more years of warming since he's been blogging -- think he can publish such a comment as this punk Joel O'Bryan's?

Watts, like Trump, doesn't care how many times he has been wrong. He has no shame. His mother never taught him pride or honesty. His character is not held up by muscle and gristle, but slouches over with lies and slander. I'm sure it was this way with him as a boy -- but it was with climate change denial that his dull, uneducated persona found its way into his true, half-assed calling, choosing to deny the Holocaust of his generation.

This is how Anthony Watts will be forever known. What a fucking waste of a life.