Michael Crichton wasn't just a science fiction writer and M.D. He was also an apparent expert on climate science, testifying before Congress on the subject in 2005, and apparently thought of himself as an expert on international economics as well. Here's what he wrote about Japan in 1992:


"Sooner or later, Americans must come to grips with the fact that Japan has become the leading industrial nation in the world. The Japanese have the longest lifespan. They have the highest employment, the highest literacy, the smallest gap between rich and poor. Their manufactured goods have the highest quality. They have the best food. The fact is that a country the size of Montana, with half our population, will soon have an economy equal to ours."

Of course, this did not come even remotely close to being true: 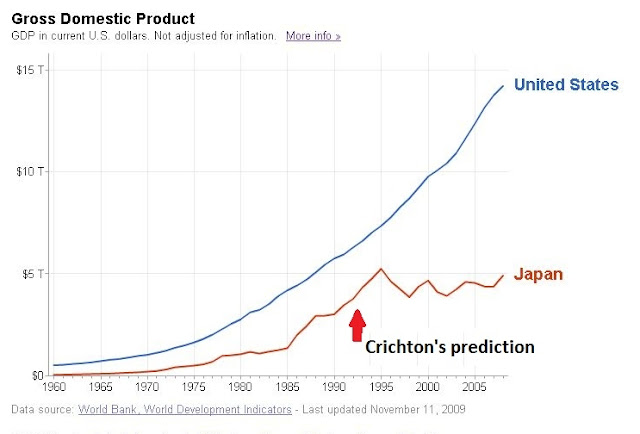 Lots of people guessed wrong on Japan. Personally I think that Japan's biggest problem was their birth rate. I'm not a fan of population growth but Japan has the 3 oldest population in the world:
Japan 44.8 years
Germany 44.9 years
Monaco 49.4 years

Here is a prediction for you. The Chinese economic “juggernaut” will come crashing down. The massive pollution they are causing is already causing civil unrest and it will get worse. The double standard between provinces is worse. I’ve never bought the idea that a million ants can kill an elephant. The elephant walks away from the ant hill, wades into a pond, rolls over and either crushes or drowns the ants. The ants back at the ant hill forget what they were supposed to do and go back to wandering around aimlessly.

Well, this is exactly why you do projections rather than predictions.