One Good Movie and One Good Book

Monsters (2010) is a bit derivative of Cloverfield, but if it had come first (and been made by JJ Abrams) it would have received just as much attention. (And without making you nauseous.) It's about two people who are trying to get back into the U.S. through the "infected zone" inhabited by extraterrestials brought to Earth from a moon in our solar system when a space probe crashed. That sounds like it could be a bit silly, but the movie is anything but. It's filmed in that verisimilitude style that started with The Blair Witch Project, and it feels extremely real. The settings and the acting and the special effects are fabulous -- the latter were all done by the director on a laptop in his bedroom, and the entire movie was made for only $500,000. I don't want to say much more than that, because it's the kind of movie that is more special the less you know going in. If you like contemporary Sci-Fi like Cloverfield and District 9, you'll surely like Monsters -- rent it. Here's the trailer 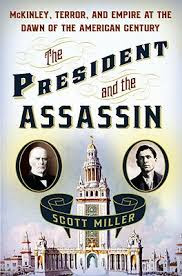 The President and the Assassin: McKinley, Terror, and Empire at the Dawn of the American Century by Scott Miller. The story of the 1901 assassination of President McKinley, the man who shot him (your stereotypical loner who couldn't fit in), and the subculture of anarchism and terror that was in the air at the time (and the exploitation of workers that gave it traction). The author weaves it all together very well; he discussed his book on the July 21st Daily Show. History the way it should be written. Here's a video clip from a History Channel program of a few years ago on the same topic.
Posted by David Appell at 9/05/2011 04:04:00 PM