I am reluctant to wade back into the issue of death threats against Australian climate scientists, because these are real people we're talking about, and who am I do judge what they find threatening or not, and in what way? As I've said before, threats are in the eye of the threatened.

Nor do I know the full context in which email are received and what has happened beforehand to the recipient, his or her department, or in Australia.

And I find people using it as points for their cause, and the taunting, to be puerile -- and it further encourages those who send abuse and threats.

But, one last time: this commenter asked, where is the evidence of the threats?

One was captured on video.

If you still need more proof, there are the email seen by Australian journalist Graham Readfern, which I excerpted here. These are outside the scope of the ANU FOI request, but no less troubling. It's convenient, but dishonest, for deniers to pretend these don't exist just because they're outside the FOI.

As part of the FOI, there is Document 5, which contains this: 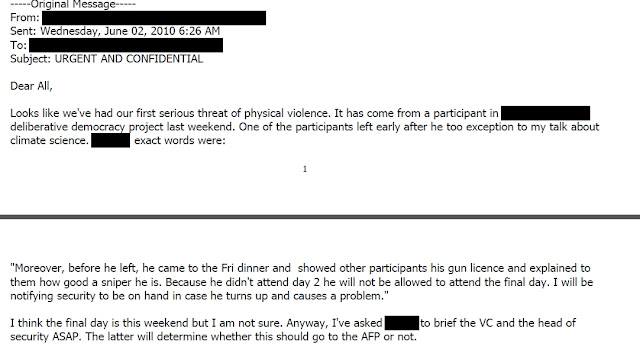 Given that kind of death threat, spoken out loud, it's no wonder that anyone who received a hostile email (such as Docs 2 (especially), 7, and 8) would consider it threatening and look for reassurances of their safety.

You and I might be used to the rude and obscene rhetoric that now routinely appears on blogs and Web forums, but that doesn't mean everyone is, especially scientists suddenly caught in an angry national debate. If they feel threatened and request protection, who are any of us to question their motives or that of a department chair who moved them to safety?

Debating those circumstances from half a world away is not fair or objective.

Nor is it worthwhile to repeatedly respond to juveniles and bullies who do nothing but taunt and mock others, pollute the debate over important issues as a way of getting attention and wealth, and encourage the very extremism they then deny. They are, literally, poisoning and sickening our world, as will be the anonymous (hence cowardly) commenters who will now no doubt flock here to post their insults.

Yes, this is really unbelievable! How can people deny that he had a gun license and did show it to other people!

- I watched the video. It was some bizarre Royal conspiracy cranks TRYING to disrupt a meeting by handing a noose to the speaker. Security jumped on the guy before he could do it.
- The action was of course idiotic & totally countrerproductive.

I watched the video too. He didn't step toward the speaker to hand him a noose, he said 'I'd like to welcome you to Australia.' That sends a message.

- in the 2nd video he explains his intentions, which was to present the speaker with a noose, but security had yanked it out of his hand as soon as he moved.
- If it was funny in anyway I'd suspect a practical joke type hoax, but actually I fear for their mental health.. I hope they don't drink too much coffee & hope they go to bed early.

Gee, I wonder why security immediately yanked it from his hand? Because, whatever he thought he was doing, it was threatening!! That's the point: different people see these things in different ways. Having someone show you a noose feels much different than standing up and thinking you're just offering your point of view.

The fabricated story in doc 5 has been completely debunked, see

QUOTE "Note to ANU scientists, this is what a death threat looks like.."
- I did imagine that public figures get nutcase death threats all the time; Australia's most public Climate Skeptic the newspaper columnist Andrew Bolt just published a recent chain of 4 insulting tweets he received including a Death Threat & incitement to GBH

(1) Very few climate scientists are "public figures."
(2) Insults are different from threats.
(3) Threats are unacceptable no matter who receives them. Just because others might receive them does not mean it's alright to send them to scientists (or anyone).

The guy has turned up at several blogs using his own name and he has been 'verified' by other people there. There has been a deafening silence from the climate scientists who made up the story.

Clearly you are a denier (you seem to think it's OK to use this word) who can't face the facts if they don't match the story in your head.

And how do you know that "this guy" isn't just someone making up a story with a fake name?

And how exactly have others "verified" his story?

And how is it known that this guy is the one ANU officials had in mind in their email? So far it seems he's just assuming he's the guy because he talked about something similar to the contents of their email (gun license, etc).

The guy has turned up at several blogs using his own name and he has been 'verified' by other people there. There has been a deafening silence from the climate scientists who made up the story.

Ohhhhhhh, those durn scientists! Always in some conspiracy, sometimes at the global level, aided by the NWO and their seditious Agenda 21!!!1one!.

I've secured my property and guns against these robed priests, believe you me yessir!

“For the record, there were no alleged death threats except when journalists picked up the story.”

The Vice-Chancellor of the ANU, on the record in The Australian a good enough source for you, Appell?

If someone "welcomed" you with a noose, how would you take it?

“For the record, there were no alleged death threats except when journalists picked up the story.”