Why It's OK to Use the Word "Denier"

The Heartland Institute puts up a post of others behaving badly, as if (a) that justifies their own bad behavior, and (b) they can't tell the difference between a freeway billboard and a Web page.

Meanwhile, those leaving the Heartland Institute have written a more Heartfelt Apology than their former bosses ever did:


"On a more personal note, I am sorry about the billboard that Heartland ran. It was an experiment. It was short lived.  I didn’t create it and didn’t know about it until about five minutes before it launched. Nonetheless, I still work for the Heartland Institute through May 31 and, as such, I feel I owe everyone an apology.  I’ll say it again: I’m sorry. The billboard just isn’t my style or a message that I particularly agree with." -- Eli Lehrer


“This is so silly. Every day now, skeptics are compared to Holocaust deniers and the media yawns. But Heartland does an edgy billboard accurately reflecting the views of those featured in it and the media acts as though they are offended?

One reason I don't get upset about using the word "denier" is that it's a perfectly good word for their position that is not, and should not be, immediately burdened by association to Holocaust deniers, even if a few idiots say that's why they use it. I'm not going to let my vocabulary be dictated by rude and thoughtless people.

The other reason is that even some deniers use the word "deny." This, for example, is from the Evangelical Declaration on Global Warming from the Cornwall Alliance for the Stewardship of Creation: 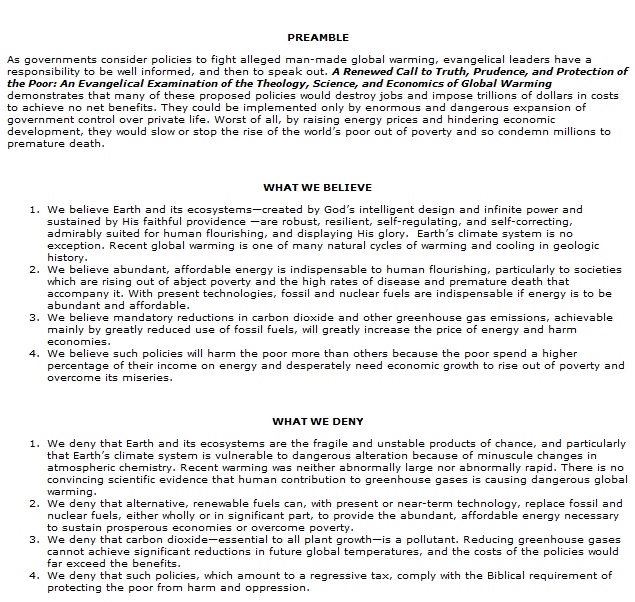 If they use the word "deny," especially as in point #1, why can't anyone else? It's the most accurate word for their position.

BTW, the Cornwall Alliance, too, won't say who funds them. Thinkprogress, while hypocritically refusing to reveal their own funding sources, says this.
Posted by David Appell at 5/16/2012 10:12:00 AM

It is way past trite that the Morano-types trot out 'Holocaust denier'.

Denial is a psychological condition.

These shills and tools should be called out when they trot out that ploy.

I see no connection between climate denial and holocaust denial. That may have been the case way back in in 2008, but its 2012 now. I enjoy and actually welcome being called a climate denier. When people call me a denier, I know I'm getting under their religious skin, I know I'm on the right track. It means I've won.

There was a comedian on TV the other day and he said that his mother had told him off for using too many swear words in his act. She said something like ‘swear words are great as an exclamation mark but lose their power when used as commas and full stops.’ How true. The same applies to insults. If you use the same insult for everyone then it loses it’s power to offend.

Denier in the case of the Holocaust is a perverse desire to reject a well documented, well witnessed event that left behind physical evidence and was investigated within a close timeframe of the actual events. The reason for denying it would be a cross between national pride and anti-Semitism, neither reasonable justifications for such a standpoint. But what are climate deniers denying and what is their justification? You could write for days and still not encompass the range of issues and motivations.

Take the simplest of questions – how much has it warmed?

What? Today, this week, this month, this year, this decade, this phase of the Pacific or Atlantic, this century, this millennium, this interglacial, since man made CO2 was an issue (when was that exactly), according to which agency, to how many decimal places, before or after adjustment, and will the answer be the same next year when all the figures have been adjusted again and again?

When you start to really look at AGW, it’s solutions and it’s politics, you realise that it is millions of issues. You want to bundle them altogether into one big heading that I have to accept or be called a denier?

Anon 4:43 -- Do you really have a problem with the notion that warming is a function of time and space? It's a very simple concept.... The world is complicated, and science tries its best to describe that complexity.... Simple answers just don't cut it.

Exactly. ‘Simple answers just don't cut it’. Too many people are trying to make out CAGW is a simple issue. Using the label denier is an attempt to simplify a group of people with hugely varying opinions and knowledge of climate change.

Yes, we could use the term denier for the most ignorant of sceptics. We could even use it for those who refuse to accept any of the basic information about global temperature and CO2 in favour of their own, little backed, theories. But we could also use it against those who rant about scenarios way beyond the worst case in the IPCC reports. Or those who think we can ditch fossil fuels in the near future in favour of our current crop of renewables. Or those who claim each and every serious weather event (and the odd earthquake) is down to CO2. Or those who think they can PR the rich west into having the CO2 footprint of the developing world. Or those who didn’t think a time would come when people stopped giving climate science a free pass.

Sceptics have become the whipping boy for a failed mobilisation of the PEOPLE. By that I mean the public, governments, countries, business, the young, the old, rich and poor. Yes, there’s a lot of money being spent, and mostly wasted, but CO2 footprints haven’t really fallen. Is that the fault of sceptics? Or is it the fault of the science? It’s a vain hope that the public would be swayed by the science so long as no one pointed out the flaws (real or imagined). People do it for themselves. I’d started to distrust some of the claims made about AGW long before I read a single word against it. And the more I read, the more sure I was that climate science has been media spun beyond anything it can really demonstrate.

But that doesn’t mean the climate scientists aren’t right about catastrophe. So we have a dilemma. How do you motivate the people when the evidence is less than clear? They have to trust in those who make the claims. They need to see that every avenue is being explored. They need to feel that their questions are being taken seriously and they’re not being sold a slick media whitewash. They don’t need to be insulted for having doubts.

Thanks for posting that declaration by the Cornwall Alliance for the Stewardship of Creation.

It is a wonderful summary of reasons for rejecting energy policies that demonize the Carbon Dioxide on which all Earth's plants and animals depend.

GC: There is no shortage of CO2 on which plants and animals depend. But the gas traps heat and too much of it alters the climate.

Plants and animals depend on water, too. That doesn't mean it can't be polluted, or undesirable in certain contexts.

If only you were right and CO2 had a significant effect on climate I would buy another SUV as my contribution to raising global temperatures.

The reality is that we are in a long lived Ice Age; the present warmth is a welcome "Inter Glacial" respite from a series of glacial periods that "Homo Sapiens" barely survived. Several of our close relatives including Neanderthals and Cro Magnons became extinct.

Mammals did much better during the PETM when temperatures were 10K warmer than today.

GC: Making conclusions about the well-being of an entire class of organisms in geologic timescales is meaningless -- it's far, far, far too high of a level to be useful in any way whatsoever. The question isn't about what temperature mammals perform best at -- it's about their ability to *adapt* to *changes* in climate. A significant fraction of mammals do not survive rapid changes in climate -- in fact, mammals only rose to ascendancy after the PETM wiped out the previous dominant species.

While there are several theories about how mammals came to be dominant I find the Chixalub asteroid impact (~75 million before present) to be a plausible explanation for the demise of the dinosaurs.

Ten million years later the climate was warm with no permanent ice at either pole. That is when mammalian species exploded into dominance. Coincidence? Certainly not if you accept Charles Darwin's theories set out in the "Origin of Species".

If you want to know what most of the world was like 30,000 years ago may I recommend the excellent "Frozen Planet" broadcasts currently running on "Animal Planet". Imagine polar bears roaming where New York city is today.

Enjoy the stunning videos while taking David Attenborough's comments with a grain of salt.

There is evidence to suggest that Homo Sapiens was reduced to a few thousand breeding pairs during the last glacial period yet there are more than 7 billion humans alive during the current warm period.

In contrast, historians call the cooler periods the "Dark Ages" and the "Little Ice Age". These were times of famine pestilence and hardship.