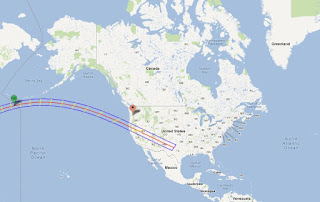 There's a solar eclipse on Sunday, with great viewing if you're in the western U.S. but still partial in almost all of the continental US, and much of Canada and Mexico. It will start about 5 pm PDT on the west coast.

It won't be total, but "annular" -- the moon is relatively far from the Earth, so it won't completely cover the Sun. Instead there will be the "ring of fire" (but only if you're in the west).

Here are some tools I've found that let you zero in on the time for your location:
Here are some viewing tips for safe watching (problems are rare, but nonzero):

NASA Eclipse Page
NASA's description of Sunday's eclipse
More than you wanted to know
How to convert from Universal Time, if you need to

I still remember my first solar eclipse -- I must have been 7 or 8, and just as it was starting my mother asked me to run over to my grandmother's to borrow a cup of sugar or something. I was terrified of looking up at the sun because of all the warnings not to look straight at it, and ran the whole way staring at the ground as best I could.

By the way, we are very lucky beings, because a solar eclipse is a rare thing for any planet. We just happen to living at a time and place when one of our moons and the Sun have the same apparent size as seen by us: both are now at a distance where they subtend the same angle:

Some people think this coincidence proves the existence of God, but they are people who already believe in God in the first place.

Because of tidal friction the moon is moving away from the Earth -- about 1.5 inches per year. NASA says:


When the Moon's mean distance from Earth has increased an additional 14,600 miles, it will be too far away to completely cover the Sun. This is true even at perigee when its disk will be smaller than the Sun's disk even at perihelion. At the current rate that the Moon's orbit is increasing, it will take over 600 million years for the last total eclipse to occur. A complicating factor is that the size of the Sun itself will grow slightly during this time, which will act to make the time of "no more total eclipses" a bit sooner than 600 million years.

You forgot to write that If you look directly in the sun you can damage your eyes.
Do not look at the sun during the eclipse with the naked eye or even with sunglasses, use an approved solar filter, solar glasses (http://amzn.to/JVibhG), or solar projection system.

Attempts to use a binoculars, telescope, or other optical viewing device(http://amzn.to/JVibhG) without a proper filter will likely result in instant and permanent eye damage!