Threats in Australia - More to the Story

Australian journalist Graham Readfern writes that the recent report from the Australian Privacy Commissioner covers only a subset of the threats received by climate scientists:


Climate sceptic commentators and bloggers have taken this decision to mean that climate scientists have not received death threats and, on the face of it, that might seem like a fair conclusion.

Except they’ve ignored two key facts which undermine their conclusion.

Secondly, the original investigation which sparked the FOI request, published in The Canberra Times, found more than 30 climate scientists had received threats or abuse of one kind or another at universities across Australia and that this campaign had been going on for years. It wasn’t news to some of us. None of the emails I published on my blog were from scientists at ANU.

Readfern gives excerpts from some of the emails he's seen, which are brutal and whose intent is unmistakable: 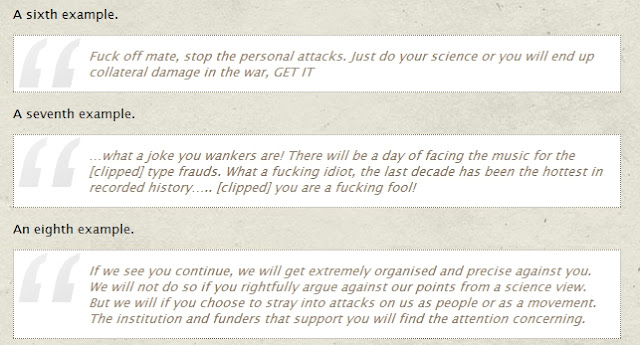 Yet people like Anthony Watts, Jo Nova and their minions have exploited the Privacy Commissioner's report and used it only as another opportunity to distort and deny the dangerous situation, and to insult, harass and intimidate even those who call attention to this ugliness -- going so far as to pretend these threats don't exist even though one has been captured on video.

Kaustubh Thirumalai said...
This comment has been removed by the author.
9:42 AM

This could be resolved by ANU releasing the emails in question with some details redacted. That way we could all judge for ourselves instead of having to second guess everything. What is it with agw people that they make life difficult for themselves instead of just being open. All it does is make sceptics suspicious of everything.

What is it with agw people that they make life difficult for themselves instead of just being open. All it does is make sceptics suspicious of everything.

The ANU emails have been released. There is a threat. There's a link to them here.

the first hand testimony re the alleged threat has been posted on wuwt.
caw.