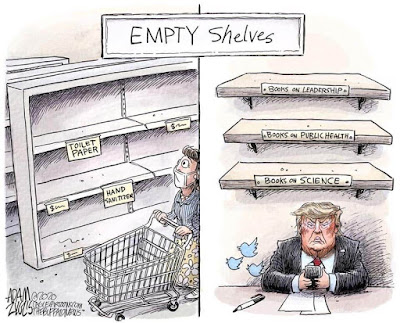 In the previous thread, Entropic Man wrote: "With an inept and ineffective federal government, through 51 states to 300 million individualists, you seem to be finding it difficult to decide on a common policy and a coordinated response."

Case in point -- the (Republican) governor of Oklahoma bragged on Twitter about going out to dinner at a crowded restaurant last night. He also refuses to vaccinate his kids and campaigned on opposition to vaccines.

That's the person who is responsible for safeguarding the people of Oklahoma from a global pandemic.

Would this be an example of the Law of Unintended Consequences?

David - yes, Trump is entirely ignorant of science and public health. He demonstrated that ignorance in some recent press conferences. Sadly, pretty much all our recent Presidents, VPs and candidates have been ignorant of these subjects. People like Obama, Biden, Pence, Romney, Bush, Gore, Clinton, McCain etc. have little or no science in their backgrounds.

However, I disagree with the cartoon's empty shelf labeled "Books on Leadership." Trump wrote a best-selling book on leadership, "The Art of the Deal." His successful leadership of a large organization shows that he's skilled at leadership.

Thanks for the link.

David, Tony Schwartz wrote "Art of the Deal". Trump just put his name on it, just as for most of his buildings that other people build and pay for. Trump's main skill has always been to get other people to do the work for him while getting a large slice of the profits. Unfortunately, he seems to have forgotten that and now thinks he really is a leader who can make good decisions himself.