How the Virus Progresses, by Country

Here's a chart from Twitter about the virus's progression, originally from the Financial Times: 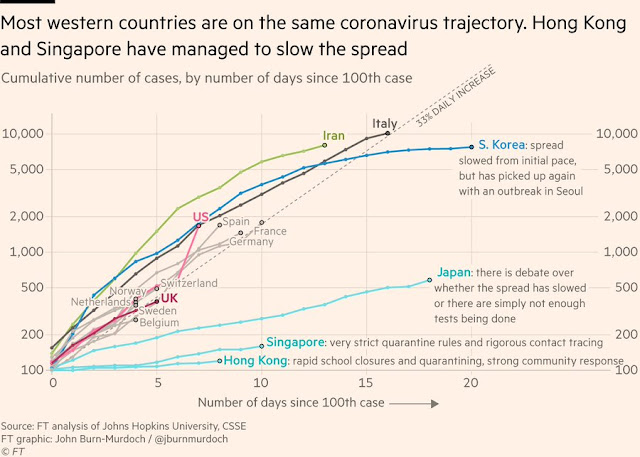 I wish I could believe that won't happen.

One of the reasons Trump won't meet with the House to talk about the virus -- he's afraid of Nancy Pelosi. I kid you not.

Politico: "Trump is concerned that declaring an emergency would hamper his narrative that the coronavirus is similar to the seasonal flu."

How is banning travel from Europe going to help? The disease is already here in amble numbers.... And was here before Trump banned travel from China. (First US case was reported on January 20th. The travel ban began on January 31st, when there were 6 reported cases in the US, and who know how many unreported cases. By January 20th there were already 326 cases in China.) And why ban travel from Europe now, but not the UK? This new ban smells like a political show staged for Trump's nationalistic followers.

Here's a good fact check on the travel bans.

Trump is having insurers waive co-pays for medical care (just testing?) related to the virus. He said nothing about the uninsured, who are thankfully covered by TrumpCare.

Right now 117 cases in Canada, with one death.

Canada is tracking 2500 people potentially exposed at a mining conference in Toronto. This is about to blow up in Canada.

I wonder if colder temperatures in Canada will see a higher case trend than in the US.

OTOH the chart shows Norway and Sweden on similar paths as everyone else.

https://www.worldometers.info/coronavirus/ says now 122 cases in Canada. (I think the Johns Hopkins site isn't updating today.) Per capita that's not a lot less than the US. (Population difference is a factor of about 9.)

Yeah. We're about on the same track.

We're at 142 now. We've just closed schools for the next 3 weeks in Ontario. Next week is march break. They are cancelling for the 14 days following.