Those people who warned early on in Trump's term that fascism was coming to America.... They were right. "America is 'staring down the barrel of martial law' as it approaches the presidential election," said Oregon Senator Ron Wyden in The Guardian.

Here's Trump gloating when the mayor of Portland, Ted Wheeler, had a bad experience at the protests:


“They knocked the hell out of him,” President Trump boasted on Fox News. “That was the end of him.” 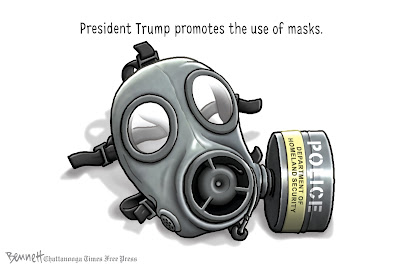 David in Cal said...
This comment has been removed by a blog administrator.
7:34 PM

David, I am REALLY sorry, I just accidentally deleted your comment here. I think it was about Winston Churchill and the Portland mayor. I don't think I can recover it. I was going to respond to it but hit the wrong link in Blogger.

It was an accident, not on purpose -- I don't do that kind of thing here -- and I feel bad. Please accept my apology.

David, I recovered your comment from email. Here it is:

Winston Churchill described people like Mayor Wheeler, when he said, "An appeaser is one who feeds a crocodile, hoping it will eat him last."

From Shakespeare, we learned the idiom, "Hoist by his own petard." When a supporter of the mob gets attacked by the mob, one may be forgiven for feeling, "It served him right."