You may have heard that the recent heat blast in Siberia was determined to be "almost impossible" without manmade climate change (Wash Post, CNN). The study, done in two weeks by a group formed by World Weather Attribution and not yet peer reviewed, found the event was "600 times more likely as a result of human-induced climate change," and "the prolonged heat was a very rare event expected to occur less than once every 130 years" without manmade global warming. Make of it what you will.

Naturally that heat wave had an impact on Arctic sea ice, which over the last couple of weeks has been at a record daily low. 2020 is starting to open up a sizable gap. According to the NSIDC's data the SIE has been lowest since 7/6 and is now 420,000 km2 below its 2nd lowest year of 2011, and according to the Japanese JAXA data this year's SIE is lowest since 7/3 and is 380,000 below their 2nd lowest year, which is last year.

From the Danish Meteorological Institute: 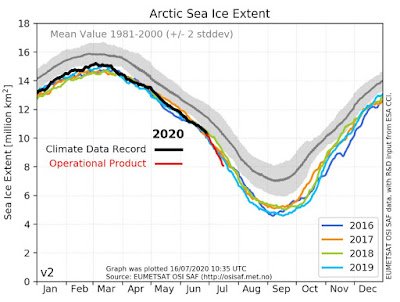 and finally, my own graph showing how this year compares to some significant years of the past:

Looking at the NSIDC maps, the American side of the Arctic seems to be following what you might call the "new normal".

The big sea ice extent losses are taking place on the Asian side.

That Siberian heatwave is having a big effect.The

As the ice edge recedes towards the Pole, I wonder if this effect will reduce. I don't feel confident enough to predict a new minimum record yet.

But 2012 melted furiously in August and early September, so if it's to break a record, 2020 needs to build up a big lead now.