I Have a Blog, and I Must Scream

People are losing their minds; for some, almost literally: French bus driver beaten to death after asking passengers to wear masks, Oregonian, 7/11/20.

Here a Portland, Oregon protester, who was simply standing across the street with a speaker, was shot in the head by a federal officer with some kind of impact munition. The video is graphic. He is in serious condition, but, last I heard, is now awake with a tube draining blood from his brain.

At least one piece of good news: Today the Washington D.C. area football team will announce they will change their name from the Redskins. (They won't announce the new name today, but have said it won't involve Native American imagery.) Credit the George Floyd and BLM protests.

By the way, seven years ago the Redskins owner, Dan Snyder, said he would never change the name.


Fauci’s efforts may have been flawed at times, but by all appearances they were undertaken in good faith. And that’s the cardinal sin here: Since handling a public health emergency in good faith requires a sincere — if sometimes tactful — effort to inform the public about it, this has inevitably put him in Trump’s cross hairs, because it has reflected badly on Trump.


Mr. Trump has long been dismissive of Dr. Fauci in private, according to White House officials, taking note of the amount of time he spent on television and of when the doctor contradicted him during press briefings.

Trump is afraid of anyone who knows more than him -- which is most people, including all scientists -- so they must go. The pandemic here is spiraling out of control. Trump must go in November, and most people can see through warped maneuvers like this.

This annoying woman is celebrating what she thinks is her little role in getting Orange County, California to drop their face mask mandate. Here is the COVID-19 case history in Orange County, from the LA Times: 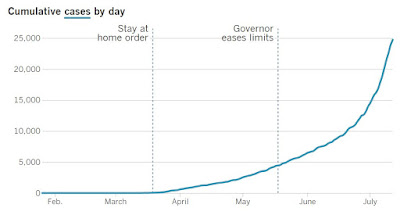 Arctic sea ice is looking pretty stark too. It appears to be flirting with the greatest weekly and monthly losses ever. Taking a nose dive.

MANTSH: Yes, I've been noticing that. It's currently the lowest for the date, and has been for about 10 days now (JAXA data). I'll blog about it soon. Thanks for bringing this up.

David - It's a mistake to assume that police must be perfect. To believe that anything less than perfection is horrifying.

Portland has faced day after day of rioting and destruction. E.g., "Portland police and Multnomah County sheriff’s deputies have filed court documents that give a day-by-day accounting of their protest response over the last six weeks, including dozens of videos that show violence downtown, photos of broken windows to courthouses and businesses and a list of more than 100 fires set. They estimated repair costs to public buildings approaching $300,000 so far and $4.8 million in property damage to businesses."
https://www.oregonlive.com/crime/2020/07/city-multnomah-county-detail-violence-cost-of-repairs-damage-in-response-to-dont-shoot-portlands-motion-to-restrict-tear-gas-less-lethal-weapons.html

You shouldn't be surprised if a law enforcement person, with a non-lethal weapon, hits the wrong person.

>> David - It's a mistake to assume that police must be perfect. To believe that anything less than perfection is horrifying. <<

So kneeling on someone's neck for 8 min 46 sec, while he's gasping saying he can't breathe, while he passes out for 3 minutes, while blood is coming out his nose, is just a little oopsie?

>> They estimated repair costs to public buildings approaching $300,000 so far and $4.8 million in property damage to businesses." <<

It's a mistake to assume that protesters must be perfect.

>> You shouldn't be surprised if a law enforcement person, with a non-lethal weapon, hits the wrong person. <<

a) The federal officer aimed right at that guy -- watch the video. He should be brought up on attempted murder and I hope he is. What was the officer protecting at that moment? What was his immediate goal?
b) why do the police have impact munitions are all??

"A 2017 review in the British Medical Journal found that 15% of patients treated for injuries from “nonlethal” projectiles suffered permanent damage and 3% died."

“Anti-fascist” protesters have been waging a nightly war against police and federal law enforcement agents in downtown Portland, centered around a federal courthouse that demonstrators were looking to “occupy.” The confrontations gradually became more violent until, in an incident earlier this week, a protester received a gruesome injury from a non-lethal pellet after allegedly throwing a “canister” at federal agents.

Your source didn't mention the alleged canister thrown at the federal agents. That would make a difference, of course, if it's true.

A canister that was shot at protesters?

It shouldn't be assumed that those doing the rioting and (esp) looting are members of BLM or those protesting with them. It could well be opportunists or anarchists. It clearly is in some cases.

Let's not forget or excuse the rioting by the police.