"To date, only two Rwandans are known to have died of Covid-19." - Farhad Manjoo, NYT. Rwanda, population 12.3 million.

Canadian Broadcasting Corporation article (title): “The lessons Canada can take from the U.S.’s mishandling of Covid-19.”

Here's a graph from the CBC article.

If you adjust for populations, the current values would be

and the peak for New York in early April would be about 9,800.

From the Financial Times, via Twitter, showing why the EU is keeping Americans out (Update, 3 hours later - the US has denied EU citizens entry since March): 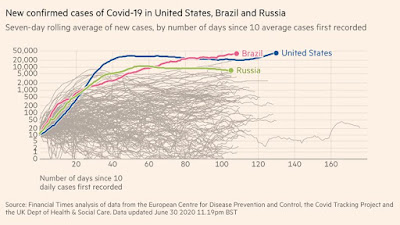 Donald Trump could not care less; he only wants someone to blame. And I do mean, he really couldn't care less. When is the last time he even mentioned the pandemic and 125,000 127,485 Americans dead? He will be remembered no better than a president who hid in the closet when foreign troops landed on our shores and invaded the country.

As I watch the Pandemic spread its ugly face all across the world, including the tremendous damage it has done to the USA, I become more and more angry at China. People can see it, and I can feel it!
— Donald J. Trump (@realDonaldTrump) June 30, 2020

Cases in the US are trending up but not deaths. There would be some lag, true, but how much?

Any article about blaming someone for Covid 19 in the US must start with Governor Cuomo. His decision to require senior facilities to accept infected people was the single worst move. The failure of Cuomo and Mayor DeBlasio to deal effectively with public transportation is why the New York City area was such a disaster.

David: Yes, nursing homes are responsible for a lot of cases and deaths. I read the other day 43% of US COVID-19 deaths occurred in or from nursing homes. But cases don't much get *out* of nursing homes, do they?

WC, here's what I've heard about why deaths aren't rising:

4) since deaths lag cases, maybe the increase in deaths just hasn't shown up yet. But this hypothesis can't last much longer, it seems. I saw this graph from a professor that shows deaths might be rising in Arizona, Texas and Florida:

Here's the article I was thinking of. (I knew it was in my tabs somewhere).

43% of U.S. Coronavirus Deaths Are Linked to Nursing Homes
By The New York Times, June 27, 2020
https://www.nytimes.com/interactive/2020/us/coronavirus-nursing-homes.html