Nothing Sublime, Just the Ridiculous

Despite being at last Saturday's Republican superspreader event, US Attorney General Bob Barr doesn't plan to self-quarantine. What's he going to do, show up at work tomorrow as if everything's normal?

Still many Republicans don't get it and are holding indoor, largely maskless events.

A Trump campaign spokesman is still mocking Biden for wearing masks. Also, "Sen. Ron Johnson (R-WI), despite his own positive test result, criticized mask mandates while saying masks are 'certainly not a cure-all.'"

2016: "At a rally in Manheim, Pa., Oct. 1, Republican presidential nominee Donald Trump mocked Democratic rival Hillary Clinton stumbling during a 9/11 ceremony after she had been diagnosed with pneumonia. 'She's supposed to fight all these different things, and she can't make it 15 feet to her car,' Trump said."

Then, of course, there was the time when Trump mocked a disabled reporter. That should have been the end of his campaign right there but 40 percent of Americans apparently couldn't be bothered.

One of these recent events is not like the other: compare the House of Representatives’ masked-up, physically distanced #NotoriousRBG Lying In State ceremony to Trump’s maskless, crammed #SuperspreaderACB Rose Garden party. pic.twitter.com/Qn8JJq8T7f


Jaime Harrison, the Democratic candidate for Senate in South Carolina running against Lindsey Graham (and tied doing very well) brought his own plexiglass shield to their debate last night: 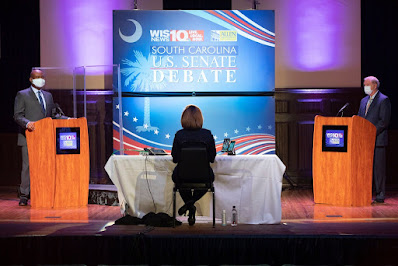 He said near the beginning of the debate, “Tonight I am taking this seriously. That’s why I put this plexiglass up. Because it’s not just about me — it’s about the people in my life that I have to take care of as well. My two boys, my wife, my grandmother.” The Times wrote, "Mr. Graham, the chairman of the Senate Judiciary Committee, may have been exposed to the virus earlier in the week by Senator Mike Lee of Utah, who serves on the committee and has tested positive."
Trump tried to show he was working yesterday from the hospital, but he signed a blank piece of paper. He was photographed in two different rooms, one with his jacket on and one with it off, but they were taken just 10 minutes apart:

The photos released by the WH tonight of the president working at Walter Reed were taken 10 minutes apart at 5:25:59 pm and 5:35:40 pm ET Saturday, according to the EXIF data embedded in both @AP wire postings that were shared by the White House this evening. pic.twitter.com/EzeqIkGdf7

It seems in the hours before the presidential debate Trump family menbers, campaign staff and White House team also flouted a mask mandate at a hotel frequented by visitors to Cleveland Clinic. The hotel is used by people traveling to the clinic for work and medical procedures.
The whole Trump family should be quarantined on an island like Typhoid Mary.

David -- I agree with your general point. Trump has been much to cavalier about covid 19. However, Barr tested negative on Friday

Barr was tested “out of an abundance of caution,” though he hadn’t been in the same room as Trump since Saturday, at a reception for Judge Amy Coney Barrett, the president’s nominee to the Supreme Court.

According to the CDC:

What do I do if I have had close contact with someone who has COVID-19?

Stay home for 14 days after your last contact with a person who has COVID-19.
Be alert for symptoms. Watch for fever, cough, shortness of breath, or other symptoms of COVID-19.
If possible, stay away from others, especially people who are at higher risk for getting very sick from COVID-19.

Seems like anyone at that super-spreader event should quarantine. Maybe there's no need. Time will tell.

Will their failure to follow CDC advice and quarantine mean further infections?

D.A.:- In February she said on Fox News that we will not see diseases like coronavirus here unlike the awful Obama presidency.
There are now more confirmed cases in the White House than Taiwan, Vietnam and New Zealand combined.

David, thanks for that. I've read that the rapid test used by the White House has a 30% false negative rate. Since Barr mingled maskless with so many people who shortly became infected (or already were), shouldn't he self-quarantine for 14 days? Hopefully he's at least not wearing a mask everywhere.

After all, the White House Press Secretary didn't test positive until today.

L, thanks for those. Yes, I'm meaning to write about #ProudBoys very shortly.