Here was an astonishing Trump response last night at the debate, captured by Slate, showing that Trump is ensconced in a Fox News bubble and just doesn't get that he's the president of real people with real problems. Biden: 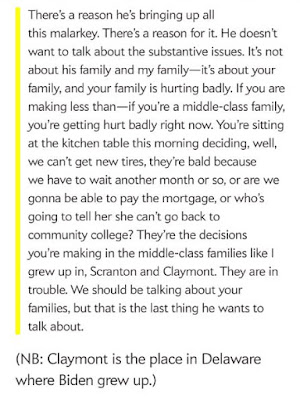 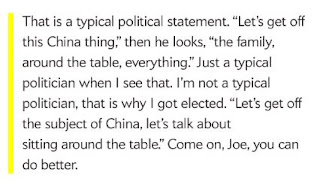 Trump mocks Biden for wanting to turn the conversation to the problems of middle-class families, calling him a "typical politician!"
Trump would rather talk about a fake scandal, avoid talking about his own scandals and corruption, or the coronavirus problem (a scandal), or the economic depression, or anything in his record. Really telling.
Eleven days until this fool is kicked out.
Posted by David Appell at 10/23/2020 11:34:00 AM

Biden's comments had remarkably little content. He mentioned middle class families, but what did he say he would do that would be good for them?

It was a depressing debate. It showed the widespread ignorance of both candidates.

For me, an important erroneous belief was Biden's comment that a big project to institute non CO2 energy would create jobs. Evidently, he doesn't understand Bastiat's broken windows fallacy. That's big, because his misunderstanding will lead to policies that inadvertently harm the economy. I am selling stocks right now, as a kind of insurance.

David, what do you mean exactly? Biden is talking about, first, ending subsidies to the gas and oil industries. Why do they need subsidies? What needs subsidies are battery research and EV research and hydropower storage and nuclear fusion and solar & wind efficiency. He's not talking about tearing down the oil and gas industry -- coal is already dead. The subsidized market will transition away from it. It's had its run.

The jobs are in solar & wind and now outrank those in oil & gas. By the way:

"Swing-state Pennsylvanians are divided on fracking. Here’s why," Vox 10/22/20
https://www.vox.com/21529260/fracking-biden-trump-2020-presidential-debate-climate-change

"his misunderstanding will lead to policies that inadvertently harm the economy. I am selling stocks right now, as a kind of insurance".

Most economists seem to be saying Biden will be better for the economy. Including these,
Over 700 economists, including several Nobel Prize laureates, have come out against President Trump's reelection bid.

"In just one term in office, Donald Trump has rendered the United States unrecognizable, and has faced no consequences for doing so," the economists wrote in an open letter, which will be updated until the Election Day.

The signatories describe Trump's time in office as a "sustained assault" on democracy and his coronavirus pandemic response as full of "dangerous misinformation...The letter also cited reports from economists at Moody's Analytics and Goldman Sachs, who have reportedly found Biden's policy proposals would spur faster economic growth and recovery.

Subsidies to gas and oil are quite small. See https://www.forbes.com/sites/drillinginfo/2016/02/22/debunking-myths-about-federal-oil-gas-subsidies/#3a6bd37a6e1c

Natural gas is good. It's the primary reason that US CO2 emissions have not risen.

Coal remains the 2nd largest source of world energy. Oil is #1, a little ahead of coal. See https://ourworldindata.org/energy

I know Bastiat's Parable. I don't see how it applies. If the oil companies want to drill more that's their business. If horse buggy makers want to make more buggies they're free to do so too.

I don't know what the subsidy number added up to in the article you linked to (did you happen to add them up?), but it ignores negative externalities, which are HUGE, regarding both air and water pollution, and climate. I've cited this over the years, WHICH EXCLUDES CLIMATE CHANGE:

--
The EIA’s reported FY2010 renewable energy subsidy of $14.7 B has to be considered in light of the substantial damages to human health and the environment from the use of fossil fuels. The report

found the cost from damages due to fossil fuel use to be $120B for 2005 (in 2007 dollars), a number that does not include climate change and that the study’s authors considered a “substantial underestimate.” For electricity generation by coal the external cost was 3.2 cents/kWh ($32/MWh), with damages due to climate change adding another 3 cents/kWh (for CO2e priced at $30/tonne). Transportation costs were a minimum of 1.2 cents/vehicle-mile, with at least another 0.5 cents/VM for climate change. Heat produced by natural gas caused damages calculated to be 11 cents/thousand cubic feet, with $2.10/Kcf in damages to the climate. They found essentially no damage costs from renewables.

This is money we’re all paying in medical costs (and bad health), and US governments now pay about half of all medical costs.

But David, what says energy will be more expensive?

Biden says energy will be more expensive, when he talks about all the jobs involved in bringing new forms of energy on board.

Biden says energy will be more expensive, when he talks about all the jobs involved in bringing new forms of energy on board.

Labour costs are higher for solar and wind, but resource costs are lower.

Fossil fuel prices will increase because their externalities will be paid for by the companies emitting the traditional air pollution and GHGs, not by the public, as is the case now.

Why should the public pay for the aluminum company's pollution just so they can keep their prices low? We can and should place a carbon tax on foreign imports of aluminum, and then they will quickly do the same for us.

Solar will be cheaper, and wind almost, and without the externalities. There is the need to build a large infrastructure of private charging stations, which will need to be subsidized at first, and as I wrote before, subsidies for battery research, EV research and more.

"According to the U.S. Energy Information Administration’s (EIA) latest inventory of electric generators, EIA expects 42 gigawatts (GW) of new capacity additions to start commercial operation in 2020. Solar and wind represent almost 32 GW, or 76%, of these additions. Wind accounts for the largest share of these additions at 44%, followed by solar and natural gas at 32% and 22%, respectively. The remaining 2% comes from hydroelectric generators and battery storage."

David - I'm all in favor of solar energy, but let's be realistic. Solar provides around 1% of US energy. We have a long way to go. Wind is larger, but it's limited because only certain locations are feasible for wind farms.

(Electricity is about half of US energy. The other half is transportation. The link shows that solar provides 1.8% of electricity.)

Off topic. David the NY Times is finally tip-toeing toward acknowledging the Ferguson Effect

6 Are Shot in Brooklyn as N.Y.C.’s Summer of Violence Spills Into Fall
Shootings that plagued the city for most of the summer have not abated, and some city leaders question whether the police have backed off enforcement.

Gun violence that had plagued the city for most of the summer has continued into the fall, a troubling trend that has some city leaders questioning whether the police have backed off enforcement to the detriment of public safety. More than 1,515 people have been shot so far this year, twice as many as all of 2019, and there have been 362 homicides, a 32 percent increase over last year.

There are far more worrying issues in the short/medium term than Biden saying he aims to transition away from oil, which wouldn't be completed whilst he was president anyway. Trump's deranged handling of coronavirus being a case in point.
As I posted above most economists say that Biden would be better for the economy anyway. Partly because Trump's coronavirus plan seems to be not only to ignore it but to do more than anyone else to spread it. That includes packing crowds of seniors into a confined space without masks for one of his superspreader rallies. This is what one economist said about this,
“Repeated waves lead to the risk of repeated shutdowns, but also a lot of consumer uncertainty,” said Till von Wachter, professor of economics and director of the California Policy Lab at the University of California, Los Angeles. “A national protocol of how to suppress the pandemic would certainly help give people the confidence to return” to their daily lives, including resuming activities like eating out, going to movies and taking vacations.

“The first thing they have to do is get the virus under control. That remains the biggest threat, and it doesn't look like Trump is going to be willing to do anything,” Holzer said. “Biden has shown a lot more interest in … a federal strategy on testing and tracing. I think that’s a very big difference.”
https://www.nbcnews.com/business/economy/trump-vs-biden-who-has-better-chance-restoring-america-s-n1244178

JD, they've given up. From earlier today:

In what way does that undermine Trump's message? Trump has been saying that one day it will just go away. The WH chief message seems more proactive than anything Trump has said. He followed with: "We're gonna control the fact that we get vaccines, therapeutics and other mitigation areas."

The President thinks he's going to control the virus, and, like a lunatic, says we're rounding the corner on it:

"Trump breaks with Meadows, says he hasn’t given up on controlling virus
The president also said the U.S. is “absolutely rounding the corner” on the pandemic, just days after the country set a single-day record of Covid-19 cases," Politico 10/26/20.
https://www.politico.com/news/2020/10/26/mark-meadows-doubles-down-pandemic-control-432463

Trump wants to control the message, not the virus. His plan has always been to just let it run its course until a vaccine is available or herd immunity is achieved.