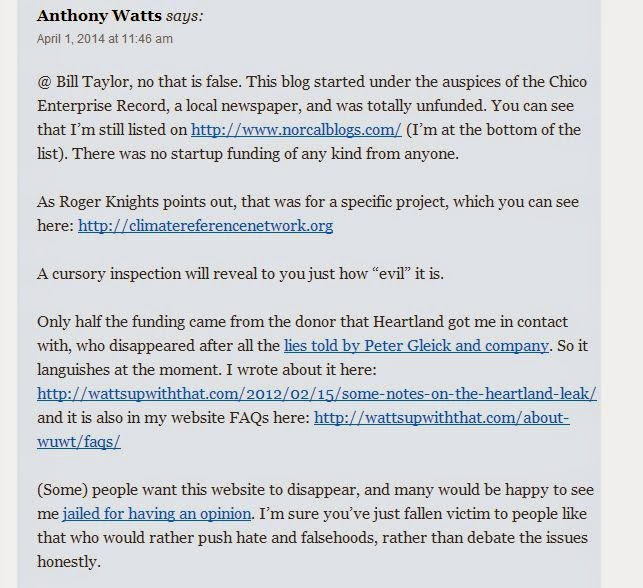 Maybe this is old news to everyone else, but it isn't to me: Anthony Watts just recently admitted to taking money from a Heartland Institute-ish donor.

You'll notice he can't come clean and say who funded him.

Or by how much.

{Aside: isn't it hilarious that Watts thinks people want him in jail? That ego knows no bounds....}

Perhaps it's the same donation he's referring to here.

Since he's not up-front about his funding sources, like scientists are, we really don't know.

I think you need to read the entire comment thread (and linked documents) which I did after reading your article.

Mr. Watts makes it clear that the money mentioned was not for his web-site but rather for another project "a climate reference network".

@Blair, where are these properly-sited temp machines, and why isn't Watts touting them to high heaven in addition to changing the world with his publications showing how wonderful these machines are?

When Anthony Watts was asked if he knew the identity of the individual who gifted him $44,000, he answered "No idea." The (presumably wealthy) benefactor wished to remain anonymous. So when Watts says he has not once received a "cheque" from "big oil", how can he be sure?

Stephen: THanks, but I'd need better sourcing than this....