NOAA's Climate Prediction Center's latest ENSO advisory has a more than 50% chance of an El Niño developing by summer:


Synopsis: While ENSO-neutral is favored for Northern Hemisphere spring, the chances of El Niño increase during the remainder of the year, exceeding 50% by summer.

with "the oceanic heat content to the largest March value in the historical record back to 1979" [graph].

I took the CPC's "plume" of model predictions for the upcoming Nino3.4 sea surface temperature anomalies, and added the same region's SSTAs from the Big One. (Niño3.4 is a particular region in the equatorial Pacific ocean where heat values have historically been useful in classifying ENSOs.) 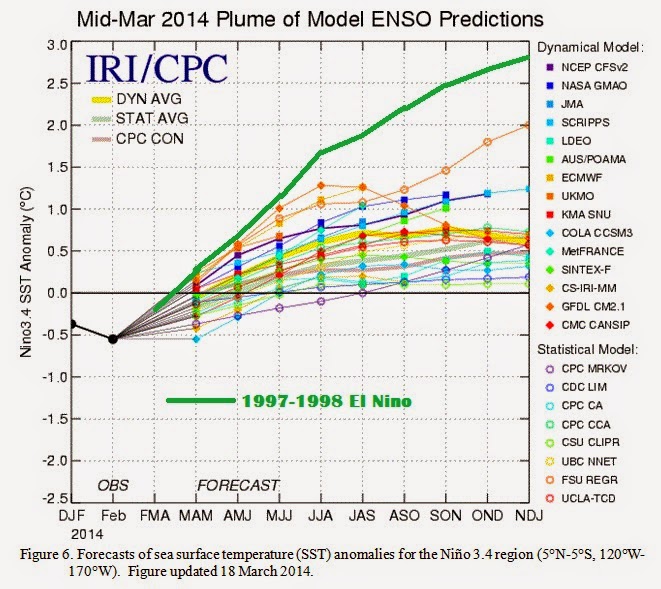 The Big El Niño of 97-98 was significantly larger than the current predictions for the predicted El Niño, with SST anomalies over twice as large.

Of course there's a lot of uncertaintly; NOAA says their models aren't so good this far away:


Despite this greater model consensus, there remains considerable uncertainty as to when El Niño will develop and how strong it may become. This uncertainty is amplified by the inherently lower forecast skill of the models for forecasts made in the spring.

Will definitely be fun to watch. Roy Spencer says after past El Niños, peak tropospheric warmth occurs about 2 to 4 months into the next year.
Posted by David Appell at 4/12/2014 03:03:00 PM

Thanks for this analysis, David. Is the fact that this El Nino will begin to build from a higher temperature base relevant in thinking about the likely consequences later this year?