The NY Times Lets Some Bad Science Slip Through

One thing I noticed about the NY Times' response to the response to their coverage of the IPCC WG2 is that they didn't include any deniers or scoffers this time, either in the letters to the editor or in an online debate among experts.... There simply was no one from the Cato Institute or AEI invited in.

Perhaps they've gone the way of the LA Times, and finally accept that scoffers have nothing to say of scientific consequence.

These are small but important victories for the science.

However, they did let one piece of bad science slip through. In a letter to the editor, Bela Liptak wrote 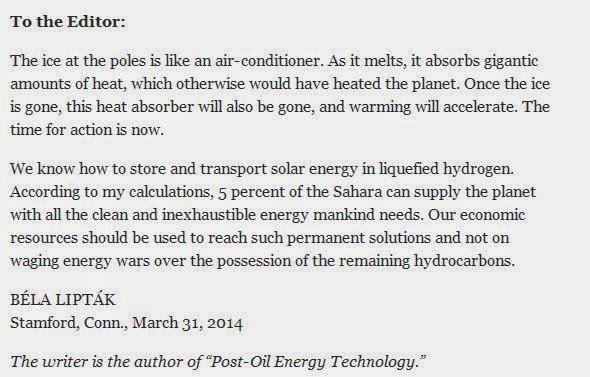 In fact, it takes very little of the planet's energy imbalance of about 0.5-1 W/m2 to melt ice. That's the reasoning behind the statements that delineate where the extra heat is going; for melting ice it's only about 2.1% of it.

To make that explicit, I looked up the rates of ice melt for the Arctic, Greenland, Antarctic, and for land-based glaciers. I found 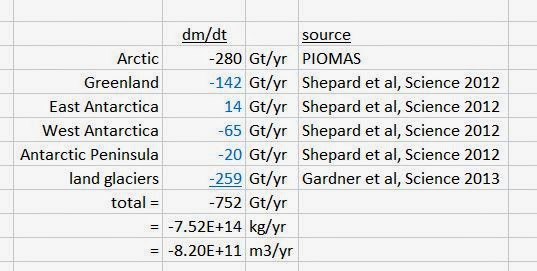 That's very small compared to our current planetary energy imbalance of about 0.5 to 1 W/m2, and so there will be little difference in global warming once all the ice is gone, unlike the effect claimed by the NYT letter writer. (Update 4/16: Of course, the ice-albedo feedback will be quite different, but that's a different phenomenon.)

I'm a little surprised one of their science editors or science writers let this letter get through.

It will be interesting to see how the slowdown of currents like the Antarctic Bottom Water affects the rate of warming in the latitudes where people live.

Well, to be fair he did not say anything about relative energy. certainly the amount of heat absorbed to melt ice Is "gigantic" by many standards.
but it is kind of silly to make that statement in this regard without explaining the minor effect on global energy imbalance