In the nth-latest response in the chain of countersuits to earlier lawsuits, Mark Steyn Inc's latest filing includes


Steyn's counterclaims are simple and straightforward, vindicate important public interests, and have a common thread. All grow out of plaintiff's use of this lawsuit and others to silence criticism of plaintiff himself. 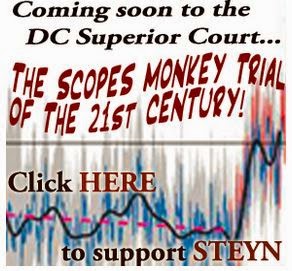 Since Steyn doesn't understand the science, it seems the only way he knows to try to silence the debate. Just yell "fraud" loud enough, on enough right-wing forums, and maybe you'll convince the trogs there must be something there, since they don't understand the science either. That will teach climate scientists a lesson about daring to do science! Just go back to your ivy towers, eggheads, lest the mob silence you again with even worse accusations next time.

Steyn made money off his Islamaphobia. Maybe he can do the same with climatephobia. He seems to be giving it a good try.
Posted by David Appell at 4/02/2014 08:03:00 AM

I know what's going on. My point is that Steyn's original "fraud" claim is just as much of an attempt to silence scientists as he's whining about now.

1) Criticizing someone is not silencing them. It is the opposite of that.

2) Mann engaged in the same type of criticism when he called other scientists "unscientific", "deniers" and said they "had no credibility".

Mann's criticisms of other scientists are based upon a deep understanding of the science. Steyn's defamation of Mann is not criticism. It is not based upon any understanding of science. It is based upon, if anything other than an overwhelming urge to hoot and jeer at what he fears and does not understand, Steyn's ideological commitment, which he privileges above his commitment to reality.
There's a real difference there.

Baloney. Steyn's criticism is based on the results of at least three investigations and comments by several leading climate scientists and expert statisticians.

Mann's criticism is based on his ego. As I said, he criticized other widely respected climate scientists who disagreed with him. Instead of professionally addressing their concerns, he chose to insult them and call them names. Mann's behavior was extremely unprofessional and immature.

1) Criticizing someone is not silencing them. It is the opposite of that.

It's the tactic of a bully -- shut up if you know what's good for you, or you'll get hit again.

Steyn's criticism is based on the results of at least three investigations and comments by several leading climate scientists and expert statisticians.

Baloney. No investigations found anything like fraud with the MBH work, nor have any leading climate scientists or expert statisticians.

I beg leave to point out that bullies have free speech rights, just like ordinary people. So do climate scientists. Mann may call Steyn a bully. Or a paid shill for the oil company. Given the Armstrong Williams example, the accusation that a political commentator shapes his opinion to the preference of a paymaster is actually damaging to his marketability. Which is to say, a tort. And yet Mann is free to make such an accusation. As, to the best of my recollection, has. About Steyn, McIntyre, and others. Mann should not be sued for such remarks, whether or not he can prove them. Whether or not he made any attempt to research them. He can state as a matter of fact, not mere opinion, that the columnist or the radio host is a paid shill. So?

By the way, David, does the 2:28 pm comment mean that you consider Wegman a "contrarian" among expert statisticians?

And, as long as both notions are rattling around more or less contemporaneously... Mann co-author Ray Bradley strongly criticized provost Peter Stearns of George Mason University for conducting two separate but inadequate investigations (Bradley did not use the term, "white wash") into allegations of plagiarism against Edward Wegman. One investigatory team, unanimously wrote: "no misconduct was involved" in the 2006 Congressional report. "Extensive paraphrasing of another work did occur, in a background section, but the work was repeatedly referenced and the committee found that the paraphrasing did not constitute misconduct." The second also unanimously wrote: "plagiarism occurred in contextual sections of the (CSDA) article, as a result of poor judgment for which Professor Wegman, as team leader, must bear responsibility."

Bradley apparently felt that the university didn't try hard enough. (Much like Steyn's co-defendent Rand Simberg felt Mann's inquisitioners didn't try hard enough.) Bradley said " "It must give lots of encouragement to students at GMU who think that copying somebody else's work without attribution is acceptable." It's my inference that Bradley implies that Wegman was directly the plagiarist in the incidents cited.

The complaint that institutions do a bad job of investigating their employees like Jerry Sandusky would seem to have historical grounds worthy of public discussion and debate quite apart from the Mann situation.

FWIW the fun here is that Steyn's new lawyers are constrained by his previous filings and have to make the best of it. Still crazy, but at least they don't insult the judge.

Well Rabbit, you are wrong.

A pleading, being a statement of what a litigant hopes to prove, is not necessarily a constraint, and can usually be amended. The trial judge or jury only gets to look at the final amended version.

An affidavit is different. A sworn statement of fact is almost impossible to withdraw. has Steyn filed any such? Haven't a clue, have you?

Other than being 100% wrong, your comment on the law and legal system was quite good.

As for insulting Judges, most of them are incompetent dolts, and I write as a guy who practiced law for 30 years. You'd never believe how many opposing counsel meet for a drink after some idiot judge has hashed every thing up and say "wtf?" "wtf? "wtf?" "wtf?".

A judge who is so mentally unstable and insecure as to falsify a judgment because a litigant called them names is no kind of judge at all. Does the word impartiality mean anything at all to a leftist. Question answers itself, right?

Unknown said...
This comment has been removed by a blog administrator.
6:01 AM

rsprung: No, criticizing someone is not necessarily silencing them. But lying about them is bullying, and sends a clear message that if they don't sut up and go away, they will be lied about even more severly.

J Melcher: But Bradley didn't compare anyone to Jerry Sandusky, did he?

there's nothing wrong with comparing two beneficiaries of a penn state whitewash investigation to each other.

there is no evidence that mark steyn thought or said mann was a child molester.

Didn't say Steyn did. But Steyn clearly does not have the scientific chops to understand the hockey stick or what the many investigations into it found.