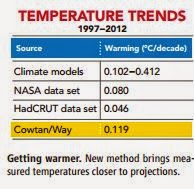 In an article on Cowtan and Way's calculation of global surface temperatures in Science magazine last week, Eli Kintisch gives the chart on the right, and summarizes their findings:


The two most prominent data sets, one maintained by a British collaboration and the other by NASA, have underestimated the pace of warming between 1997 and 2012 by an estimated 158% and 49%, respectively.


Correcting the data sets "should have been done ages ago," Rahmstorf adds.

In shortdown, the slowdown in warming is only half as big as previously thought.


"When you fill in the gaps, temperatures in recent years go up, and temperatures around 1998 go down," Cowtan told the climate scientists in Potsdam. The planet has warmed most where scientists are watching least, enhancing the perceived size of the slowdown in warming.

But it doesn't sound like GISS and the Hadley Center are going to implement the kriging scheme for infilling regions with no temperature stations; instead they're going to add more stations:


In Potsdam, Cowtan shared an unpublished result that suggests a data-smoothing algorithm may be tuning down temperature measurements that NOAA's Arctic climate stations supply to NASA. NOAA says it is adding new stations to its network to address the Arctic data gap. Philip Jones of the University of East Anglia in Norwich, U.K., which runs HadCRUT jointly with the U.K. Met Office, says HadCRUT is also seeking to add stations.

I'm a little surprised at that (if true); station coverage is always going to have holes somewhere, and keeping them operating in remote places always is going to be a challenge. Surely Cowtan & Way's algorithm can't be that difficult to implement -- C&W have calculated January and February's anomalies, even though they aren't funded to do that. (In fact, their site says they weren't planning to update temperatures after December 2013.)

Here's a plot of Cowtan & Way's anomalies minus those of HadCRUT4, on an annualized basis: