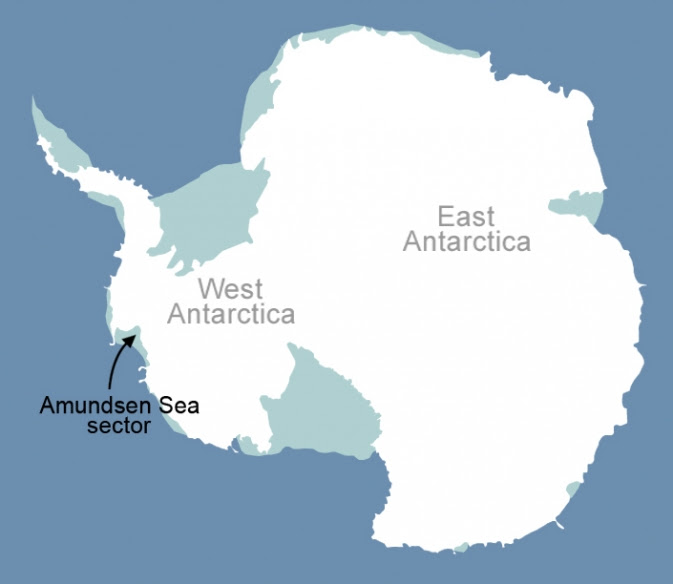 We've been hearing theoretical talk about tipping points, and now it seems one has arrived.

There's no stopping the melting of part of the West Antarctic Ice Sheet, says a new study in an AGU press release:


WASHINGTON, D.C. — A new study finds a rapidly melting section of the West Antarctic Ice Sheet appears to be in an irreversible state of decline, with nothing to stop the glaciers in this area from melting into the sea.

...the glaciers in the Amundsen Sea sector of West Antarctica “have passed the point of no return,” according to glaciologist and lead author Eric Rignot, of the University of California Irvine and NASA’s Jet Propulsion Laboratory (JPL) in Pasadena, California. The new study has been accepted for publication in Geophysical Research Letters, a journal of the American Geophysical Union.

These glaciers already contribute significantly to sea level rise, releasing almost as much ice into the ocean annually as the entire Greenland Ice Sheet. They contain enough ice to raise global sea level by 4 feet (1.2 meters) and are melting faster than most scientists had expected. Rignot said these findings will require an upward revision to current predictions of sea level rise.

“This sector will be a major contributor to sea level rise in the decades and centuries to come,” Rignot said. “A conservative estimate is it could take several centuries for all of the ice to flow into the sea.”