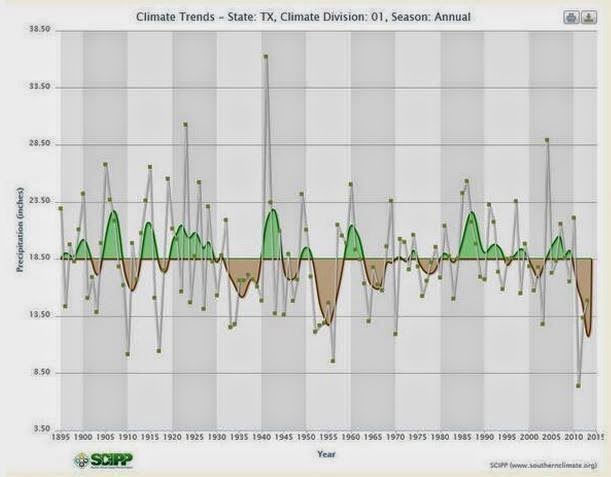 I can't prove it, but it strikes me that drought just might be the weather phenomenon that causes the most suffering of any. And Texas is having a dousy.

This graph is via Victor Murphy, an NWS Climate Service Program Manager.

He also forwards this National Geographic News story, which goes so far as to describe the drought in western Texas, western Oklahoma, western Kansas and eastern Colorado "A New Dust Bowl."

The National Weather Service, measuring rain over 42 months, reports that parts of all five states have had less rain than what fell during a similar period in the 1930s.

And now all of California is in "severe drought."

Unlike hurricanes and tropical storms, we don't name droughts -- maybe we should -- but if we did, this one should obviously be called "Drought Inhofe." Whatever proportion of this drought isn't caused by climate change -- and higher temperatures themselves make droughts worse by increasing evaportion from lakes and soils -- he surely deserves it. Because ultimately, denying climate change comes down to denying human suffering.
Posted by David Appell at 5/16/2014 07:12:00 PM