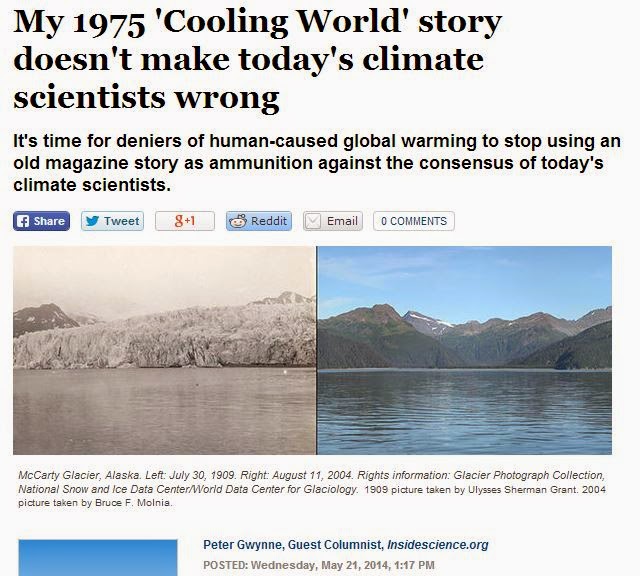 Several atmospheric scientists did indeed believe in global cooling, as I reported in the April 28, 1975 issue of Newsweek. But that was then.

In the 39 years since, biotechnology has flowered from a promising academic topic to a major global industry, the first test-tube baby has been born and become a mother herself, cosmologists have learned that the universe is expanding at an accelerating rate rather than slowing down, and particle physicists have detected the Higgs boson, an entity once regarded as only a theoretical concept. Seven presidents have served most of 11 terms. And Newsweek has become a shadow of its former self.

And on the climate front? The vast majority of climatologists now assure us that Earth's atmosphere is not cooling. Rather it's warming up. And the main responsibility for the phenomenon lies with human activity.

As my list here shows, there were plenty of scientific papers on CO2-warming by 1975, including major scientific reports. In fact, 1975 was when Manabe and Wetherald did their first calculation of climate sensitivity, obtaining a value of 2.9°C.

To his credit, Gwynne concludes:


Speaking personally, though, I accept that I didn't tell the full story back then. Indeed, the issue raises questions about the relationship between science writers and scientists as well as the attitudes toward science of individuals with political agendas.

It's these seemingly little finds that are the reason you should keep blogging, David.